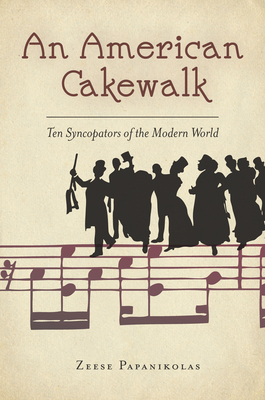 Ten Syncopators of the Modern World

The profound economic and social changes in the post-Civil War United States created new challenges to a nation founded on Enlightenment and transcendental values, religious certainties, and rural traditions. Newly-freed African Americans, emboldened women, intellectuals and artists, and a polyglot tide of immigrants found themselves in a restless new world of railroads, factories, and skyscrapers where old assumptions were being challenged and new values had yet to be created. In An American Cakewalk: Ten Syncopators of the Modern World, Zeese Papanikolas tells the lively and entertaining story of a diverse group of figures in the arts and sciences who inhabited this new America.

Just as ragtime composers subverted musical expectations by combining European march timing with African syncopation, so this book's protagonists--who range from Emily Dickinson to Thorstein Veblen and from Henry and William James to Charles Mingus--interrogated the modern American world through their own syncopations of cultural givens. The old antebellum slave dance, the cakewalk, with its parody of the manners and pretensions of the white folks in the Big House, provides a template of how the tricksters, shamans, poets, philosophers, ragtime pianists, and jazz musicians who inhabit this book used the arts of parody, satire, and disguise to subvert American cultural norms and to create new works of astonishing beauty and intellectual vigor.

Zeese Papanikolas lives and works in Oakland, California. He is a former Stegner Fellow and long-time member of the Humanities Department at the San Francisco Art Institute. His writing includes Buried Unsung: Louis Tikas and the Ludlow Massacre (1982), Trickster in the Land of Dreams (1998), and American Silence (2007).
Loading...
or support indie stores by buying on