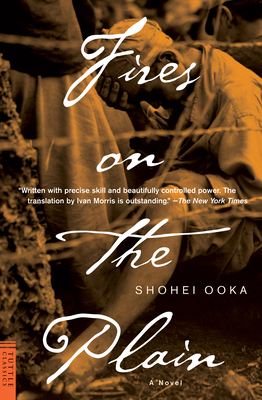 Fires on the Plain (Tuttle Classics)

Written with precise skill and beautifully controlled power. The translation by Ivan Morris is outstanding. --The New York Times **Winner of the 1952 Yomiuri Prize** This haunting novel explores the complete degradation and isolation of a man by war. Fires on the Plain is set on the island of Leyte in the Philippines during World War II, where the Japanese army is disintegrating under the hammer blows of the American landings. Within this broader disintegration is another, that of a single human being, Private Tamura. The war destroys each of his ties to society, one by one, until Tamura, a sensitive and intelligent man, becomes an outcast. Nearly losing the will to survive, he hears of a port still in Japanese hands and struggles to walk through the American lines. Unfazed by danger, he welcomes the prospect of dying, but first, he loses his hope, and then his sanity. Lost among his hallucinations, Tamura comes to fancy himself an angel enjoined by God to eat no living thing--but even angels fall. Tamura is never less than human, even when driven to the ultimate sin against humanity. Shocking as the outward events are, the greatness of the novel lies in its uplifting vision during a time of crushing horror. As relevant today as when it was originally published, Fires on the Plain will strike a chord with anyone who has lived through the horrors of war.

Shohei Ooka (1909-1988) was born in Tokyo. He specialized in French at Kyoto University and was graduated in 1932, after which he made a name as a translator of French literature. In 1944 he joined the Japanese Army and was taken a prisoner in the Philippine defeat of 1945, experiences that figure prominently in Fires on the Plain. In 1953-54 he became a Fulbright Visiting Professor at Yale University, and subsequently lectured on French literature at Meiji University in Tokyo. He authored two novels and contributed short stories and essays to almost every literary magazine in Japan. Shohei Ooka was awarded two literary prizes: the Yokomitsu Prize in 1949 for his first book, Record of a POW, and the Yomiuri Prize in 1952 for Fires on the Plain
Loading...
or support indie stores by buying on