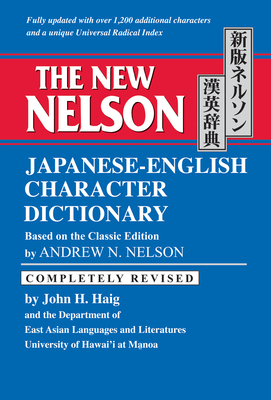 Unexcelled as a dictionary of basic Sino-Japanese characters. Extremely easy to use.--Japan Society This is the utmost classic and well regarded standard Japanese Kanji Dictionary available today.
The New Nelson Japanese-English Character Dictionary is a complete revision of The Original Reader's Japanese-English Character Dictionary, published by Charles E. Tuttle Company in 1962. Long the foremost Japanese-English character dictionary, adopted by Japanese-study programs around the world and used at all levels of Japanese language study, the Nelson, as it is familiarly called, has been enhanced in this edition with several fundamental changes.This revised edition is updated with additional characters, contemporary definitions, and an innovative radical index system and sets new standards of excellence, easy-of-use, and reliability for Japanese language reference tools. This edition keeps pace with the evolution of the Japanese language and remains an indispensable tool for students and scholars of Japanese.

Andrew Nathaniel Nelson was born in Great Falls, Montana, in 1893. He received his B.A. from Walla Walla College and his Ph.D. from the University of Washington. As a Seventh-Day Adventist missionary in Asia between 1918 and 1961, Dr. Nelson played a prominent role in the fields of education and language training. Throughout his life, Dr. Nelson remained devoted to the study of the Japanese language and the fundamentals of Chinese. John H. Haig is an associate professor of Japanese in the Department of East Asian Languages and Literatures at the University of Hawai'i at Manoa, one of the largest departments of its kind in the U.S.
Loading...
or support indie stores by buying on