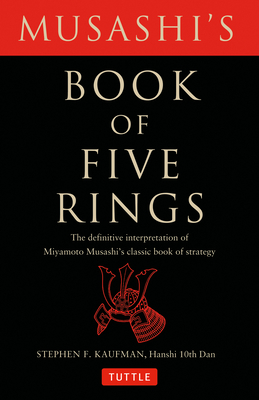 The Definitive Interpretation of Miyamoto Musashi's Classic Book of Strategy

This classic interpretation of Miyamoto Musashi's famous Book of Five Rings is explicitly intended for the martial artist--as Miyamoto Musashi originally intended. It explains the underlying truths necessary for a full understanding of Musashi's message for warriors. The result is an enthralling book on military strategy that combines the instincts of the warrior with the philosophies of Zen Buddhism, Shintoism, Confucianism and Taoism. It is a crucial book for every martial artist to read and understand. Like the original, this classic book of strategy is divided into five sections. The Book of Earth lays the groundwork for anyone wishing to understand Musashi's teachings; the Book of Water explains the warrior's approach to strategy; the Book of Fire teaches fundamental fighting techniques based on the Earth and Water principles; the Book of Wind describes differences between Musashi's own martial style and the styles of other fighting schools; while the Book of No-thing describes the way of nature as understood through an unthinking existing preconception. Famed martial artist and bestselling author Stephen Kaufman has translated this classic without the usual academic or commercial bias, driving straight into the heart of Musashi's martial teachings and interpreting them for his fellow martial artists. The result is an enthralling combination of warrior wisdom and philosophical truths that Musashi offered to other warriors who wished to master the martial way of bushido.

Stephen F. Kaufman, Hanshi, 10th Dan, is the holder of the highest title and rank attainable in the martial arts. His martial system, Hebi-ryu (School of the Snake), is recognized as one of the most effective martial methods in the world. A career spanning close to 60 years began in Okinawa in the 1950's. He's acknowledged as the founding father of American karate and has received countless awards and honors, including an induction into the World Karate Union Hall of Fame as Author of the Year in 2011. Kaufman has authored and interpreted many martial arts titles including The Art of War by Sun Tzu, The Way of the Modern Warrior, and The Shogun's Scroll, all available from Tuttle Publishing.
Loading...
or support indie stores by buying on