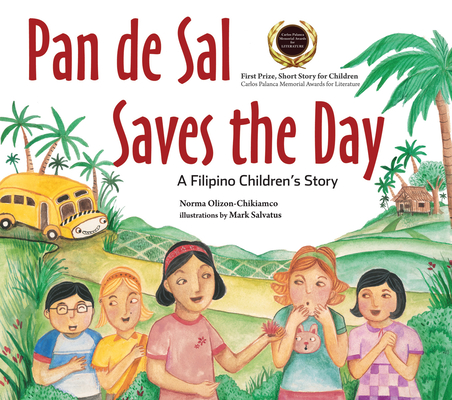 This colorfully illustrated multicultural children's book presents an entertaining story from the Philippines that teaches an important lesson about self-esteem. A heart-warming story of a young Filipino girl who builds self-confidence after spending a day with her classmates, Pan de Sal Saves the Day: A Filipino Children's Story is an award-winning inspiring tale for young children everywhere. It's the story of a young girl named Pan de Sal who lives in the Philippines and thinks she's the unluckiest girl in the whole world. Aside from not liking her own name and finding her appearance strange, she doesn't have all the fancy things her classmates have. She can't even muster the courage to try out for the Glee Club, even though she has a beautiful voice. Things change suddenly when an unexpected event forces her into the limelight. With her innate talent and resourcefulness, Pan de Sal wins the admiration of her classmates and finds the confidence she needs to fulfill her dreams. For anyone who has ever felt like an outsider or experienced adversity, Pan de Sal Saves the Day teaches children to see the unique qualities in everything and everyone, even themselves.

Norma Chikiamco wrote for various newspapers and magazines before shifting to writing short stories for children. A journalism graduate of St. Theresa's College in the Philippines, she has studied at the International Institute for Journalism in Berlin, Syracuse University in New York, and the Culinary Institute of America. Aside from winning first prize in the Carlos Palanca Memorial Awards for Literature, she has also been given the Outstanding Journalism Award by the Australian-New Zealand Chamber of Commerce and the National Book Award by the Manila Critics' Circle for a cookbook she edited. She has also written a series of cookbooks for Periplus Editions in Singapore. IllustratorMark Ramsel N. Salvatus III hails from Quezon province in the Philippines. He graduated cum laude from the University of Santo Tomas in Manila with a degree in fine arts, major in advertising. He has won several national competitions in the Philippines, including ArtPetron.
Loading...
or
Not Currently Available for Direct Purchase