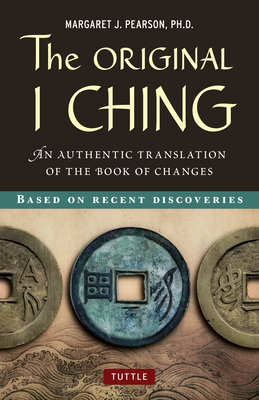 An Authentic Translation of the Book of Changes

First among the ancient classics, the I Ching or Book of Changes is one of the world's most influential books, comparable to the Bible, the Koran, and the Upanishads. The I Ching's purpose is universal: to provide good counsel to its users in making decisions during times of change. Since its origins about 3,000 years ago, it has become a compendium of wisdom used by people of many cultures and eras. This groundbreaking new translation by Dr. Margaret Pearson is based on the text created during the first centuries of the Zhou Dynasty, study of documents showing how it was used in the dynasty, and on current archaeological research findings. Her translation removes centuries of encrusted inaccuracies to better reveal the I Ching's core truths for today's readers. Whether you are interested in trying this millennia-tested method of making wise choices or in understanding the worldview of the early Chinese, this edition is essential reading.

Praise For Original I Ching: An Authentic Translation of the Book of Changes…

"Pearson's mission was to restore the text to its original form. Simultaneously, she kept an eye on the clarity of the text, concerned that it be comprehensible to non-scholars. Whether customers use the book for consultation, meditation, or scholarly research, having this ancient text restored to its original form is something very valuable indeed."—New Age Retailer

"Her interpretation and translation is unique, not only in the sense that she has made a meaningful separation of the original text from the commentaries ... but also in the sense that she approaches the text with an ungendered and holistic perspective."—Xinzhong Yao, Director, King's China Institute, King's College London

"A delightful and scholarly translation of what may be the oldest self help book ... Pithy, wise, and ever sensitive to context, the Book of Changes, in Pearson's translation, provides a new lens through which we can see the freshness of old things."—Terri Apter, Newnham College, Cambridge University; author of The Sister Knot

"Looks beneath the commentarial accretions to this text that are hostile to women to reveal a classic that both men and women can turn to for wisdom."—Anne Behnke Kinney, Professor of Chinese, University of Virginia; Director, Traditions of Exemplary Women

"Margaret Pearson's I CHING is an important book, not only because it is the first interpretation, ever, by a woman in a wholly male-dominated field, but because of its freshness and directness. While being rooted in the most recent scholarly discoveries and research, it achieves the nearly impossible, simply by being real, relevant, and readable. Obscurity, pomposity and ponderousness are thrown out of the window. A delight."—Richard Burns, poet

"[Margaret] uses her background knowledge of ancient Chinese life and thought to provide a context that makes things more accessible. [...] Margaret writes in a plain, direct style that encourages you simply to contemplate the natural imagery—the scenery of the trigrams (had you thought of 26 as 'the skies that lie among mountain peaks'?) and also the imagery of the original."—OnlineClarity.com

"The Book of Changes has been translated into English a number of times, but Margaret Pearson's new translation stands out for its fidelity to the oldest and deepest layer of the text, cutting through centuries of later commentary. Her lucid explanations of the hexagram texts will be of great service to those who seek to use this ancient compendium of wisdom as a guide to introspection and self-cultivation in our own time."—John S. Major, independent scholar, former professor of East Asian history at Dartmouth College, and translator of The Huainanzi

"Tuttle's The Original I Ching: An Authentic Translation of the Book of Changes is a new translation by Skidmore College scholar Margaret J. Pearson based on new archaeological and textual evidence from the original Zhou text. Pearson's work helps identify the role of women in early Chinese history."—Publishers Weekly

Margaret J. Pearson, Ph.D., studied Chinese literature with Hellmut Wilhelm, and history with Jack Dull and Chan Hok-la. She has taught Chinese history and thought, for over thirty years, at Skidmore College, the New School for Social Research, Pace University, State University of New York (Albany) and Marymount Manhattan College. She has been elected to life membership at Clare Hall, Cambridge University and to membership in the Early China Seminar at Columbia University
Loading...
or support indie stores by buying on