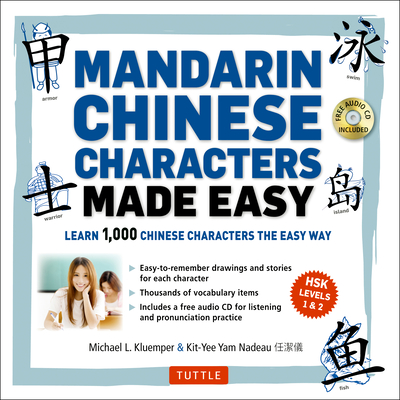 This highly-visual book introduces an effective new method for learning Chinese characters using visual stimuli and pictographs. Learning the necessary characters used to write even simple Chinese sentences can be a long and arduous process. Chinese Characters Made Easy makes the learning process fun and easy by presenting the 1,000 most common characters using a new mnemonic approach that associates each character with a memorable visual and verbal clue--making memorization easy. The character for "person", for example, is superimposed over a sketch of a man representing "a person standing on two legs"—drawing the reader's attention to the distinctive shape of the character and associating the drawing with the character's meaning. The Chinese characters are presented in groups or clusters all sharing common elements and meanings, for context and ease of identification. These groups of characters all share common root symbols known as radicals or relate to a particular theme or topic such as colors, numbers, animals, or body parts. Pronunciations, meanings and vocabulary compounds are provided for each character in the group. A free audio CD delivers native-speaker pronunciations for all the characters and their associated vocabulary. Key features of Chinese Characters Made Easy include:
This Chinese character book's visual approach is a powerful learning tool. It can be used by students and is entertaining and useful to general readers who are curious about how the Chinese writing system works and how it developed.

Michael L. Kluemper was a JET Program participant from 1990-1993 and has been teaching about Japanese language and culture since then. As a board member of the National Council of Japanese Language Teachers from 2001-08, Kluemper served on national task forces for the implementation of the Japanese AP course, National Board Certification for teachers, and various advocacy campaigns. He now teaches Japanese at Ballard High School in Louisville, KY. Kityee Yam Nadeau is currently an elementary school teacher of Mandarin in Louisville Kentucky. A native Cantonese speaker, born and raised in Hong Kong during the British rule she started her English education at a very young age. Along with her native Cantonese and English, she also studied Mandarin, the universal language of China and Chinese culture. After moving to the USA, she taught Mandarin at a local Chinese society's weekend school for children. This led to her being asked to teach in the public school system. There she designed curriculum and participated in textbook development workshops in the USA and China. Kit carries on her Chinese traditions as an accomplished student of traditional Tai Chi, Tai Chi Fan, and Tai Chi Sword. She enjoys mahjong and Chinese cooking in her spare time.
or support indie stores by buying on
Copyright © 2020 American Booksellers Association