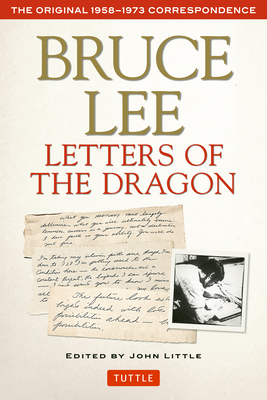 Bruce Lee Letters of the Dragon

Letters of the Dragon: Correspondence, 1958-1973 is a fascinating glimpse of the private Bruce Lee behind the public image. So much has been written about Bruce Lee--the martial arts superstar whose combination of strength, agility and charisma are legendary--but seldom are we able to see beneath the veneer of Lee's public image to view his inner self. Bruce Lee Letters of the Dragon does just that--offering a highly personal view of the man through the letters he wrote to his close friends and family from his teenage years right up until his untimely death in 1973 at the tender age of 32. This unparalleled collection of Bruce Lee's personal correspondence begins with his high school days in Hong Kong and continues throughout the period when he was working as a successful actor in America and Hong Kong, right up until the time he died. During this period he was also developing radically new concepts about Asian martial arts--including his own Jeet Kune Do martial arts system. In these letters, we can see all the optimism, tenacity, integrity and intense loyalty for which Bruce Lee is known and adored by millions of fans today. More than a fascinating chronicle of his rise to superstardom, these letters offer intimate glimpses of the artist, husband, father and friend behind the legend. This Bruce Lee Book is part of the Bruce Lee Library which also features: Bruce Lee: Striking ThoughtsBruce Lee: The Celebrated Life of the Golden DragonBruce Lee: The Tao of Gung FuBruce Lee: Artist of LifeBruce Lee: The Art of Expressing the Human BodyBruce Lee: Jeet Kune Do

Bruce Lee (1940-1973) was a martial artist, film actor, filmmaker, philosopher and the founder of the original mixed martial art known as Jeet Kune Do--"the way of the intercepting fist." As an actor, Lee became a cultural icon. He was born in San Francisco but spent his formative years in Hong Kong. His groundbreaking action films sparked intense interest in the Asian martial arts in the West. His most famous film is Enter the Dragon (1973). He was an avid student of all forms of martial arts along with Eastern and Western philosophy and is regarded today as the most influential martial artist who ever lived. Lee moved beyond the rigid traditional style of martial arts to develop his own free-form, modern style of Jeet Kune Do. John Little is considered one of the world's foremost authorities on Bruce Lee, his training methods, and philosophies. Little is the only person who has ever been authorized to review the entirety of Lee's personal notes, sketches, and reading annotations. Little's articles have appeared in every martial arts and health and fitness magazine in North America. John is an expert in the fields of martial arts, bodybuilding, and physical conditioning.
Loading...
or support indie stores by buying on