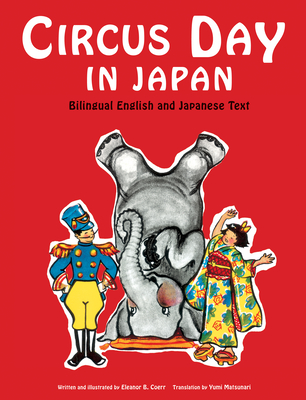 This multicultural children's book contains both English and Japanese script along with beautiful, colorful illustrations. Circus Day in Japan is the warmly-illustrated story of an exciting day spent by two Japanese children, Joji-chan and Koko-chan, at a circus. Joji-chan and Koko-chan delight at the new sights of their first circus, and young readers are gently introduced to Japanese customs and sites. Perfect for those interested in retro books, the simple text and artwork provide a nostalgic window into Japanese family life in the early 1950s. Originally written by Eleanor Coerr, author of the popular Sadako and the Thousand Paper Cranes, this English translation of a classic Japanese children's book accessible to a new generation of both English and Japanese speaking readers.

Eleanor B. Coerr traveled to Japan as a newspaper reporter in 1949, where she lived on a farm for a year, learning the language. Inspired by her farm family and a visit to a local circus, Eleanor wrote and illustrated Circus Day in Japan. It was first published by Tuttle in 1953 and remained in print until 1968. Eleanor is best-known for Sadako and the Thousand Paper Cranes. Yumi Matsunari is a professional translator and interpreter living in Fukui, Japan. She studied in Kyoto, Cambridge and London. Among her works are A Treasury of Japanese Folktales and Japanese Made Easy.
or support indie stores by buying on
Copyright © 2020 American Booksellers Association