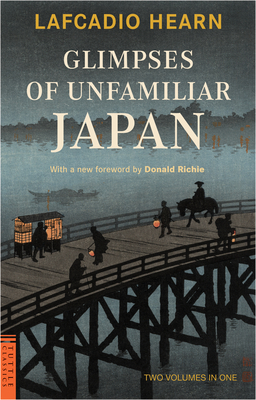 Two Volumes in One (Tuttle Classics)

Glimpses of Unfamiliar Japan is a complete, two-volume set of one of the most outstanding books on 19th century Japanese history and culture. Though Lafcadio Hearn went on to write a dozen more books on Japan, this collection of first impressions remains his most popular. Among the reasons is that here, more than anywhere else, the author most vividly captured a place that so affected him that he stayed for the rest of his life. The modern reader can still, through these pages, experience that first charm of Japan, intangible and volatile as a perfume. Glimpses of Unfamiliar Japan combines two volumes of a work that first appeared in 1894. In the pages of this book are the customs, the superstitions, the charming scenery, the revelations of Japanese character, and all the other elements that Lafcadio Hearn found so bewitching. Here, for example, are essays on such subjects as the Japanese garden, the household shrine, the festivals, and the bewildering Japanese smile--all aspects of Japanese life that have endured in spite of the changes that have taken place during the modernization of Japan. The Japanese character and the Japanese tradition are still fundamentally the same as Hearn found them to be, and for this reason, his writing is still extremely revealing to modern readers. This edition also contains a new foreword by noted writer and examiner of Japanese culture Donnie Richie that puts Lafcadio Hearn and his classic works into perspective for readers just discovering Hearn's writing for the first time.

Lafcadio Hearn (1850-1904) was born on the Greek island of Lefkas, the son of an Anglo-Irish surgeon in the British army and a Greek mother. After his parent's divorce when he was six, he was brought up in Dublin by a great aunt. At the age of nineteen, he went to America, eventually ending up in New Orleans as a newspaper reporter. His flight from Western materialism brought him to Japan in 1890, where he worked for an English newspaper, the Kobe Chronicle, and taught in various schools. In 1896, he began teaching English literature at Tokyo Imperial University, a position he held until 1903, and at Waseda University. Hearn married a samurai's daughter, Koizumi Setsu, became a Japanese citizen and a Buddhist and changed his name to Koizumi Yakumo. At the young age of 54, he died of a heart attack. Hearn's search for beauty and tranquility, for pleasing customs and lasting values, made him a confirmed Japanophile. His keen intellect, poetic imagination, and wonderful clear style permitted him to penetrate to the very essence of things Japanese. He became the great interpreter of things Japanese to the West. Hearn's most famous work is a collection of lectures entitled Japan: An Attempt at Interpretation (published posthumously in 1905). His other books on Japan include Out of the East (1895), Kokoro (1896), Gleanings in Buddha Fields (1897), Exotics and Retrospectives (1898), In Ghostly Japan (1899), Shadowings (1900), A Japanese Miscellany (1901), and Kwaidan (1904).
Loading...
or
Not Currently Available for Direct Purchase