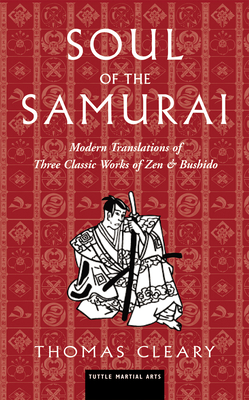 Soul of the Samurai

Soul of the Samurai contains modern translations of three classic works of Zen & Bushido. In Soul of the Samurai, bestselling author and respected translator Thomas Cleary reveals the true essence of the Bushido code or Zen warrior teachings according to 17th-century Japanese samurai master Yagyu Munenori and his Zen teacher Takuan Soho. The three works of Zen & Bushido translated in Soul of the Samurai are: Yagyu was a renowned swordsman and chief of the Shogun's secret police, while Takuan was the Zen spiritual mentor to the Emperor. This samurai philosophy book contains the first English translations of their seminal writings on Bushido. Cleary not only provides clear and readable translations but comprehensive notes introducing the social, political, and organizational principles that defined samurai culture--their loyalty to family, their sense of service and duty, and their political strategies for dealing with allies and enemies. These writings introduce the reader to the authentic world of Zen culture and the secrets behind the samurai's success--being "in the moment" and freeing the mind from all distractions, allowing you to react instantaneously and instinctively without thinking. In these classic works, we learn that Zen mental control and meditational training were as crucial to the Samurai as swordsmanship and fighting skills.

Thomas Cleary is one of the best known and most accomplished translators of the ancient wisdom of Asia. His work includes The Art of War, The Book of Five Rings, Code of the Samurai, Samurai Wisdom and Secrets of the Japanese Art of Warfare, as well as over 70 other books on Asian military history and philosophy, Buddhism and Taoism.
Loading...
or support indie stores by buying on