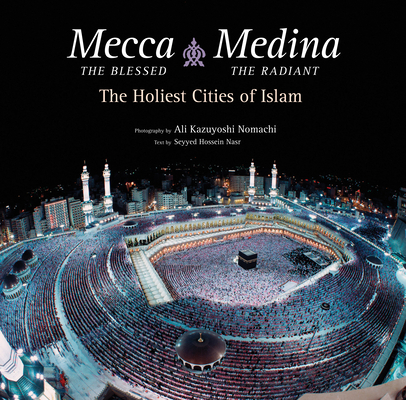 Mecca the Blessed, Medina the Radiant

The Holiest Cities of Islam

Mecca the Blessed, Medina the Radiant is an unprecedented photographic exploration of the holiest cities of Islam and the Hajj, or annual pilgrimage during Ramadan when more than a million faithful journey to Mecca's Great Mosque to commemorate the first revelation of the Qur'an (Koran). This book allows both Muslims and those unfamiliar with the Islamic faith complete access to the holiest sites of one of the world's major religions, practiced by a quarter of the world's population but often misunderstood in the West. Photographer Ali Kazuyoshi Namachi, a Muslim convert from Japan, garnered the full support of Saudi Arabian authorities--rarely given--to shoot in cities where photography is strictly controlled, and non-Muslims are not allowed. An expansive work of photojournalism, Mecca the Blessed, Medina the Radiant includes:

Text by Seyyed Hossein Nasr, one of the most highly regarded scholars of Islam, enhances the stunning Islamic holy city photographs to illuminate many aspects of Islamic belief that have remained enigmatic to non-Muslims--until now.

Photographer Ali Kazuyoshi Nomachi is known for his exhaustive research and field work covering the Arabian peninsula. His photographs have been featured in Life, National Geographic, and Stern, among other leading magazines. Nomachi is the recipient of many awards, including the Annual Award 1997 from the Photographic Society of Japan. Author Dr. Seyyed Hossein Nasr, born in Iran, was educated at MIT and Harvard University, and is now Professor of Islamic Studies at The George Washington University. He has taught and lectured extensively throughout the Islamic world, Western Europe, North and Central America, India, Japan, and Australia. Dr. Nasr is the author of more than twenty books, including Islamic Art and Spirituality, Islamic Life and Thought, and Traditional Islam in the Modern World.
Loading...
or support indie stores by buying on