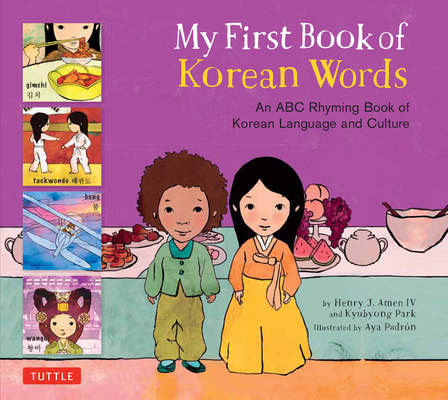 My First Book of Korean Words

An ABC Rhyming Book of Korean Language and Culture

My First Book of Korean Words is a beautifully illustrated book that introduces young children to Korean language and culture through everyday words.

The words profiled in this book are all commonly used in the Korean language and are both informative and fun for English-speaking children to learn. The goals of My First Book of Korean Words are multiple: to familiarize children with the sounds and structure of Korean speech, to introduce core elements of Korean culture, to illustrate the ways in which languages differ in their treatment of everyday sounds and to show how, through cultural importation, a single word can be shared between languages.

Both teachers and parents will welcome the book's cultural and linguistic notes, and appreciate how the book is organized in a familiar ABC structure. Each word is presented in Hangeul, as well as in its Romanized form.

With the help of this book, we hope more children (and adults) will soon be a part of the nearly 80 million people worldwide that speak Korean!

"Open up any one of these books and you'll see beautiful illustrations depicting the target culture, a fun and memorable rhyme, the foreign vocab in Roman letters, as well as in their native script." —Castle View Academy blog

"These books are really sweetly illustrated and focus on teaching the basic sounds and written characters of the chosen language." —A Mum Reviews blog

"With just one book, your kids will be exposed to Korean culture and the Korean alphabet in a rhyming beautifully illustrated picture book." —PragmaticMom.com blog

"Explore gimchi or kimchi, Taekwondo, and won (currency of Korea) as you learn all about Korea." —Growing Book by Book blog

"Perfect for early language introduction, this hardcover book used the English alphabet to introduce Korean words to youngsters. The hangul writing is included for each word so if you have been learning your Korean letters, you can practice reading the words!" —TheseTemporaryTents.com blog

"Alphabet books that reinforce the beauty and importance of leaning about many languages and cultures." —Booklist

"The illustrations by Aya Padron are well done and display lovely children at play. Many benefits accrue to young children who are exposed to a second language. There are cognitive benefits, such as greater neural activity and denser tissue in the brain area related to memory, attention, and language. These benefits appear to be long term. In addition, books such as this one also introduce culture." —Seattle Book Review

Kyubyong Park works at a Korean publishing company that creates practice books for Koreans learning English. Along with Henry J. Amen, IV, he is the author of Korean for Beginners.

Henry J. Amen, IV, is a freelance editor and writer of language learning materials; he studied Korean while working for a publishing company in Seoul for two years. Along with Kyubyong Park, he is the author of Korean for Beginners.

Aya Padron is a freelance artist who works with many media, among them painting and photography. She is the illustrator of Korean for Beginners.
Loading...
or support indie stores by buying on