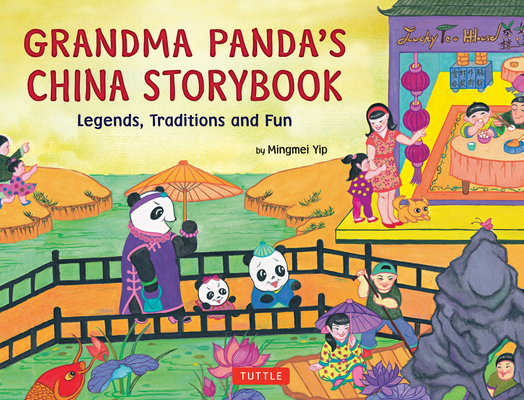 With classic Chinese fairytales and folk stories, Grandma Panda's China Storybook introduces children to Chinese culture in a fun, adventurous way Grandma Panda is a wonderful teacher, a wonderful storyteller and a wonderful cook Her grandchildren, Baobao and Lingling, love staying with her every summer because, at Grandma Panda's house, each day is an adventure. This summer, with the help of celebrated novelist and artist Mingmei Yip, Grandma will take them to a world filled with Chinese calligraphy, kites, kung fu and more They'll get to hear Grandma's stories of a time long ago in China, when everything began, and learn simple Chinese language along the way. Come join Grandma Panda, Baobao and Lingling for a summer of fun and learning as bright watercolor illustrations make favorite legends come alive Chinese stories include:

Mingmei Yip began writing and painting during her childhood in Hong Kong. Her first newspaper article was published when she was fourteen; the next year she was admitted to the prestigious Hong Kong Chinese Contemporary Artists' Guild, becoming its youngest member. For many years her paintings appeared regularly in Hong Kong exhibitions. She received her Ph.D. from the University of Paris (Sorbonne) and has studied the traditional Chinese arts of Tai Chi, Qin music, Buddhist sacred chant and calligraphy. Mingmei has collaborated with Carnegie Hall and the New York Metropolitan Museum of Art. She is the author of the popular Chinese Children's Favorite Stories and four novels: Skeleton Women, Peach Blossom Pavilion, Petals from the Sky and Song of the Silk Road. She lives in New York City.
Loading...
or support indie stores by buying on