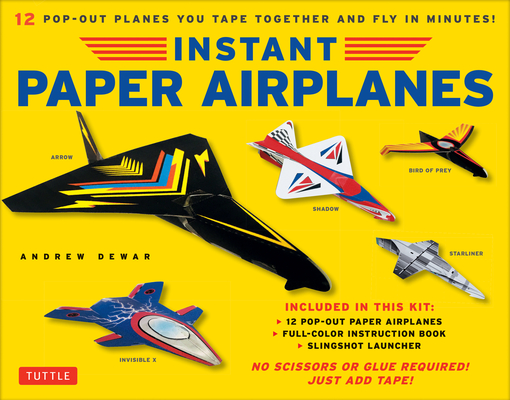 Prepare for takeoff With this new collection of high-performance paper airplane models from master designer Andrew Dewar, paper planes are easier to make and fly than ever before. Everything prospective aviators need is included in this paper airplane kit: The instruction book provides tips on tuning the aerodynamics of each model for even better performance. Plus, these planes can be assembled in under a minute, no glue or scissors required--instant gratification for airplane buffs of every age These are just a few of the amazing aircraft you can build: Use the paper airplane launcher to send your creations above the treetops, and watch with your friends as they glide gracefully back down to earth. A truly incredible sight to behold.

Andrew Dewar was born in Toronto, Ontario, and graduated from Ryerson Polytechnic Institute (B.A. Journalism) and University of Toronto (M.A. Japanese Studies, Library and Information Science) before moving to Japan in 1988. After completing doctoral studies in library science at Keio University, he joined the faculty of a junior college in Japan. Soon after arriving in Japan he rediscovered his childhood love of assembling paper crafts, folding origami and designing and flying paper airplanes. His passion for paper airplanes led him to become president of the Fukushima Paper Airplane Club. Dewar has published over 30 paper crafting books and kits. He also teaches paper airplane workshops and does seminars at schools, libraries, community centers, and museums. He lived and taught library science in Fukushima, Japan, until the giant earthquake and nuclear accident in March 2011, when the city became unsafe. After a brief stay in Canada, he's returned with his family to Gifu, Japan.
Loading...
or support indie stores by buying on