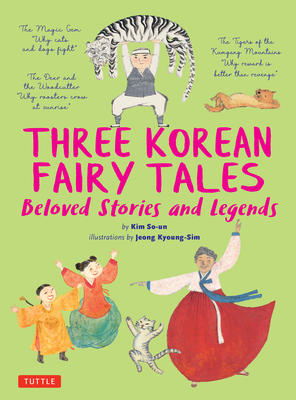 This multicultural children's book presents a selection of traditional Korean folk tales that are instantly recognizable to Koreans of all ages. These treasured tales are retold by Kim So-un, an eminent storyteller who is a household name in Korea. The illustrations combine modern and traditional Korean art elements and techniques in telling these classic stories. In the Tuttle tradition of bringing beloved stories from other countries to new generations of readers, this book presents the following tales: With Three Korean Fairy Tales, kids and parents alike will learn about Korean culture by experiencing the country's rich storytelling tradition.

Kim So-un was an eminent Korean storyteller and a specialist in Korean poetry and folklore. A former journalist for a major newspaper and chief editor for the Korean Children's Educational Institute, he published two dozen books during his lifetime, including anthologies of poetry, folk tales, folklore, folk songs and critical essays. Kim So-un is also the author of Korean Children's Favorite Stories. Jeong Kyoung-Sim enjoyed reading stories by Kim So-un when growing up, and is delighted now to illustrate his work. Kyoung-Sim is a graduate of the College of Fine Arts at Seoul National University. Her work is based on using traditional Korean colors, tones and painting methods in a modern style. She has illustrated a number of children's books, including Korean Children's Favorite Stories.
or
Buy Here
Copyright © 2020 American Booksellers Association