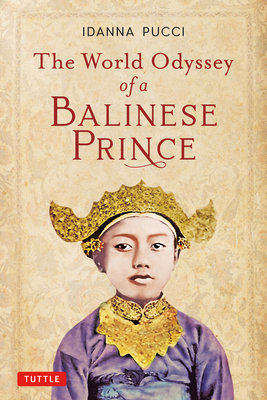 The World Odyssey of a Balinese Prince (Paperback)

The true story of a prince from Bali, whose fascinating life was shaped by uncommon events and exotic places. Born in 1919, Prince Made Djelantik witnessed pivotal moments of history: the twilight of a feudal age, the Second World War in Nazi-occupied Holland, Indonesia's long battle for independence from four hundred years of Dutch colonial rule, and finally, the great changes provoked on his island by unbridled development. Driven by an early passion for medicine, the prince set sail for Europe on the eve of WWII to study at the University of Amsterdam. His calling then took him to far-flung corners of the planet, where he encountered everything from a pirate ambush in the South China Sea and a night attack by a famished army of rats, to a deadly volcanic eruption and his arrest by Saddam Hussein's secret police. When he returned to Bali in the mid-1970s, his public identity as a doctor took precedence over his royal lineage and he was known simply as "Dr. Djelantik" on the island. The doctor implemented the successful campaign which finally eradicated malaria from Bali and established the island's first hospital. Author Idanna Pucci's evocative narrative of this unusual life is told in short story form, making The World Odyssey of a Balinese Prince an easy read for anyone who finds themselves dreaming of distant places. More than 40 of Dr. Djelantik's own watercolors--done when he was in his 80s--help to illustrate his adventures in vivid detail.

Since leaving her ancestral home in Florence, Italy, Idanna Pucci pursued her interest in diverse cultures by traveling all over the globe. Various writing assignments for Asia Magazine enabled her to travel throughout the Indonesian Archipelago, Asia and across the Soviet Union on the last steam engine of the Trans-Siberian railway. During her studies in Comparative Literature at Columbia University, she became intrigued by the ceiling paintings of the Court of Justice in the ancient royal capital of Bali. Her literary quest resulted in the volume The Epic of Life: A Balinese Journey of the Soul (Little, Brown & Co.). She is also the author of Brazza in Congo: A Life and Legacy (Umbrage Editions) and The Lady of Sing Sing (Simon & Schuster). She has given life to award-winning documentaries such as Black Africa White Marble that sheds light on Central Africa's colonial past and its troubled present; and Talk Radio Tehran about those women in Iran who fulfill their aspirations in spite of the gender-apartheid system that dominates their lives. She lives with her husband in New York City. Dr. A.A. Made Djelantik (1919-2007) built a string of small clinics in remote corners of the Indonesian archipelago in the turbulent years following the country's independence. Later, he traveled with the World Health Organization to Somalia, Iraq & Afghanistan. He founded a medical school in Bali, as well as the famed Academy of Dance, and authored Balinese Painting and The Birthmark: Memoirs of a Balinese Prince.
or support indie stores by buying on
Copyright © 2020 American Booksellers Association