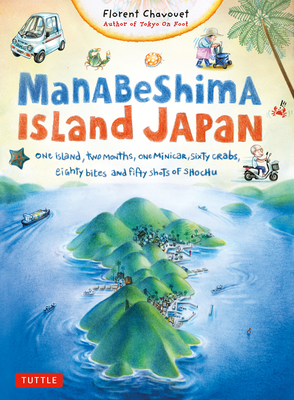 More than just a Japan travel guide, Manabeshima Island Japan paints a colorful and entertaining picture of a particular place and time in Japan. Japan is made up of thousands of sacred islands, artificial islands, industrial islands, resort islands, wild islands and exploding islands...but artist Florent Chavouet had only ever visited two of them. This graphic novel is the story of one summer when he decides to get to know one more--the tiny island of Manabeshima. This speck of dirt in the Inland Sea, off the coast of Osaka, has a total population of 300, and he sets himself the task of recording everything and everyone he meets there in quirky detail on the pages of his sketchbook. Whereas Chavouet's other best-selling book, Tokyo on Foot, focuses on the physical city, it is the local island inhabitants who form the heart of this new book. Chavouet's sensitive drawings and insightful captions create instant portraits of incredible literary depth. The cast of characters who are lovingly depicted includes Ikkyu-san, owner of the island's only bar (and the bar's three regulars--skinny guy, Day-Glo cap guy and greasy-haired guy); the young Nakamura family and their five kids; the layabout Shimura-san, a living relic from the hippie 1970s; Kurata-san the policeman; Reizo-san the island intellectual in his elegant Meiji-era home; Rock the Neanderthal fisherman; and a chorus of assorted grandmothers and cats--all of whom welcome Chavouet into their community as a kindred soul. Against a backdrop of fireworks, summer festivals, fishing expeditions, and the constant hum of the cicadas, Chavouet depicts these characters so vividly and sympathetically, and describes their rustic way of life in such simple and appealing terms that we find it as hard to finish the book as Chavouet found it to leave the island at the end of his enchanted summer holiday.

Florent Chavouet is a young graphic artist and author living in France. When he returned from Japan, he realized that all the observing and sketching he had done led to his evolution as an artist. This is his second book, following Tokyo on Foot
or support indie stores by buying on