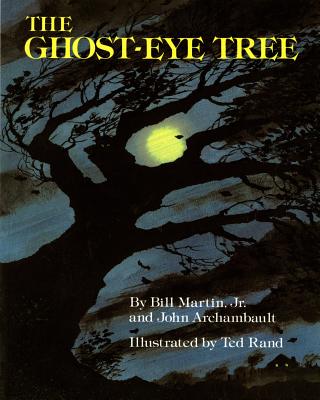 One dark and windy autumn night when the sun has long gone down, a young boy and his older sister are sent to the end of town to get a bucket of milk. As they walk down the lonely road, bathed in eerie moonlight, all the boy can think about is the ghost-eye tree.

What will happen when they come to the tree? Can they run past it or will it reach out and grab them?

Any child who has been frightened of the dark will enjoy this scary book, which is meant to be read aloud. Bill Martin, Jr., and John Archambault developed the story as a reader's theater piece, which they have performed in schools across the country. Now, with Ted Rand's stunning illustrations, the ghost-eye tree comes to life. Watch out!


Praise For The Ghost-Eye Tree…

“A top-notch hair-raiser that will do for any old night of the year, but will really spike a Halloween story hour.” —Bulletin of the Center for Children's Books

“A delightfully alarming story poem about a dark and windy night when a boy and his sister are sent on an errand and must pass a certain tree that moans and reaches out its arms, freezing their hearts with fear. Strong, exciting illustrations make it all real. The poem would be especially good read aloud.” —The New Yorker

“Deep, dark pictures of a windy, cloudy, spooky night provide the appropriate atmosphere for this tantalizingly told story-poem about a brother and sister who are sent out at night to fetch a pail of milk.” —Booklist

John Archambault has collaborated on several successful picture books, including The Ghost-Eye Tree, Barn Dance!, and Knots on a Counting Rope. With Bill Martin Jr. he wrote Listen to the Rain and The Magic Pumpkin.

Ted Rand has collaborated with Bill Martin, Jr. and John Archambault on several successful picture books, including The Ghost-Eye Tree, Barn Dance!, and Knots on a Counting Rope.
Loading...
or
Not Currently Available for Direct Purchase