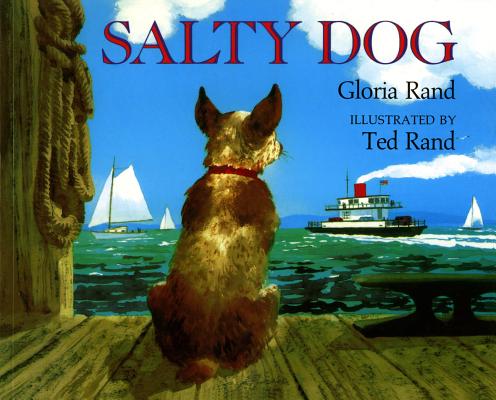 Based on a true story, Gloria Rand's children's picture book Salty Dog--featuring beautiful watercolor illustrations by her husband Ted Rand--follows the adventures of a puppy who grows up riding on ferries and sails around the world.

Boat builder Zack takes the ferry to work every day accompanied by his young pup Salty, until the dog gets too big to hang around the shop. But Salty enjoys the daily voyage too much to be left behind, taking the ferry by himself to join Zack.

Once his vessel is as sea worthy as his dog, Zack and Salty set sail on a wonderful and heroic journey across the oceans.

“Gloria Rand's first book is based on a true story, and it moves along quickly and succinctly; vibrant watercolor illustrations show Salty for the sporty hero he is.” —Publishers Weekly

“Reflected with sparkling clarity in Rand's realistic illustrations, the boat's construction fascinatingly takes shape with each turn of the page....It offers a pleasing nautical twist on the theme of boy-dog companionship.” —Booklist

Gloria and Ted Rand are a husband-and-wife team who have collaborated on a number of picture books, including Mary Was a Little Lamb and A Home for Spooky. The Rands live on Mercer Island in Washington State.

Ted Rand has collaborated with Bill Martin, Jr. and John Archambault on several successful picture books, including The Ghost-Eye Tree, Barn Dance!, and Knots on a Counting Rope.
Loading...
or support indie stores by buying on