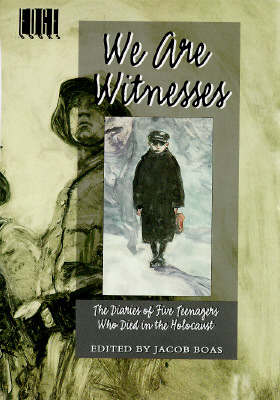 We Are Witnesses (Hardcover)

Five Diaries Of Teenagers Who Died In The Holocaust

We are the bleeding clouds, and from the seas of blood have we come...We are witnesses...we were brought into being by an inferno of suffering; and we are a sign of peace to you. --Moshe Ze'ev Flinker, Age 17

On the eve of Passover, 1944, shortly after he wrote these words, Moshe and his family were betrayed to the Nazis and sent to Auschwitz. Like the other four diarists in this book, he did not survive the war. But their words did. Written in the midst of "an inferno of suffering," these fragile yet powerful records are a "sign of peace" to all of us.

Each diary reveals one voice, one teenager coping with the impossible. We see David Rubinowicz struggling against fear and terror in Poland. Yitzhak Rudashevski in Lithuania shows us how Jews clung to culture, to learning, and to hope, until there was no hope at all. In Belgium, Moshe is the voice of religion, constantly seeking answers from God for relentless tragedy. Finally, in Hungary, Eva Heyman demonstrates the unquenchable hunger for life that sustained her until the very last moment. Yet We Are Witnesses is not just about any single victim in the Holocaust.

Author Jacob Boas, who was born in the same camp to which Anne Frank was sent, ends by discussing her famous diary. Looking back at the other four through Anne, and at Anne with fresh eyes after the others, we see the largest truth they all left for us: Hitler could kill millions, but he could not destroy the human spirit. These stark accounts of how five young people faced the worst of human evil are a testament, and an inspiration, to the best in the human soul.

Jacob Boas has a Ph.D. in modern European history and is the director of the Oregon Holocaust Research Center. He lives with his wife and three children in Beaverton, Oregon.

Praise For We Are Witnesses: Five Diaries Of Teenagers Who Died In The Holocaust…

"Holocaust survivor Boas bears powerful witness to what happened to ordinary families as they were crowded into the ghettos, persecuted, and murdered." --Booklist, starred review

"Boas ably guides the reader through these literary landscapes of hell, where none of the writers survived...[These] young people make the accounts more universal, and permit us to see the common humanity of each of these different witnesses." --Jewish Bulletin

"We are privy to the thoughts of five adolescents who wrote about, and then died because of, the Nazis’ persecution of the Jews." --Bulletin of the Center for Children’s Books, starred review