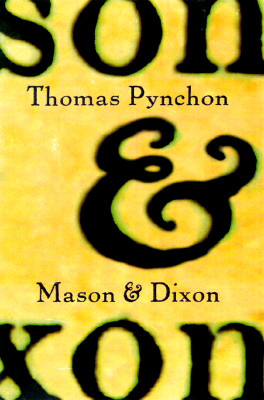 Charles Mason (1728-1786) and Jeremiah Dixon (1733-1779) were the British surveyors best remembered for running the boundary between Pennsylvania and Maryland that we know today as the Mason-Dixon Line. Here is their story as re-imagined by Thomas Pynchon, featuring Native Americans and frontier folk, ripped bodices, naval warfare, conspiracies erotic and political, major caffeine abuse. We follow the mismatch'd pair--one rollicking, the other depressive; one Gothic, the other pre-Romantic--from their first journey together to the Cape of Good Hope, to pre-Revolutionary America and back, through the strange yet redemptive turns of fortune in their later lives, on a grand tour of the Enlightenment's dark hemisphere, as they observe and participate in the many opportunities for insanity presented them by the Age of Reason.

"A novel that is as moving as it is cerebral, as poignant as it is daring...a book that testifies to Pynchon's remarkable powers of invention and his sheer power as a storyteller." ----Michiko Kakutani, The New York Times

"The coast-to-coast #1 national best-seller is now in paperback Splendid...Mason & Dixon--like Huckleberry Finn, like Ulysses--is one of the great novels about friendship in anybody's literature."--John Leonard, The Nation

"An astonishing and wonderful book."----The New York Review of Books

Thomas Pynchon is the author of "V.," "The Crying of Lot 49," "Gravity's Rainbow," "Slow Learner," a collection of stories, and "Vineland." He received the National Book Award for "Gravity's Rainbow" in 1974.
Loading...
or
Not Currently Available for Direct Purchase