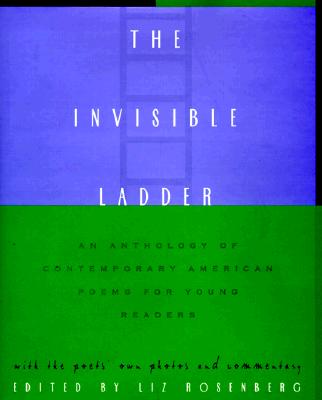 An Anthology of Contemporary American Poems for Young Readers

"Sitting by the barbecue"
"waiting for sausages and hot dogs"
."........."
"I see a tiny spider"
."........."
"a silver speck"
"glistening"
"at its mouth, "
"climbing the invisible ladder"
--from "Dinner Together" by Diana Rivera
This anthology of poems by America's best poets glistens too, and offers its own silvery ladder for readers to climb.
Liz Rosenberg, herself an accomplished poet, wanted to make contemporary poems for adults accessible to a broader readership. She searched for works which, in both feeling and expression, could reach from one age group to another. Then she asked the poets to write about the links between poetry and childhood, and to send photos that showed how they looked when they were young, and who they are today.
"The Invisible Ladder" is a gift from everyone who contributed to it: a hand extended from those whose art is crafting words to a new generation of readers and writers.


Praise For The Invisible Ladder: An Anthology of Contemporary American Poems for Young Readers…

"This anthology combines modern American poetry with commentary by the poets and photos of them as children and adults. Like...other fine YA anthologists, [Rosenberg] introduces many exciting new adult voices to young people."--Booklist, boxed review

Liz Rosenberg is a teacher of children's literature at the State University of New York at Binghamton. She has published two collections of her poetry for adults, as well as a number of highly praised picture books for younger readers. She lives with her husband and their son in Binghamton, New York.
Loading...
or
Not Currently Available for Direct Purchase