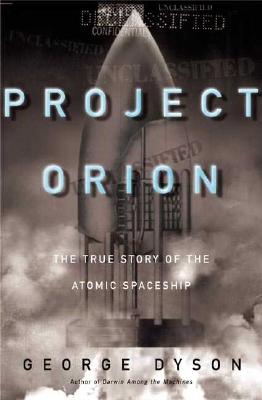 The True Story of the Atomic Spaceship

The improbable story of the wildest idea-a space craft powered by hydrogen bombs-to come out of the space race.

It was the late 1950s. The Cold War was raging. Sputnik had made its voyage and the space race was on. In America, it was the age of tail fins and "duck and cover," but it was also a time of big ideas and dreams. On his way to school one day, George Dyson learned of a truly fantastical idea: massive space vehicles that would be powered by explosions of multiple hydrogen bombs. Among the brilliant minds behind this project was George's father, the eminent physicist Freeman Dyson.

Project Orion chronicles this fascinating episode in U.S. scientific research, while capturing a unique time in American history and culture. The project brought together a cadre of brilliant physicists, the first such assemblage since the Manhattan Project of fifteen years earlier. In an idyllic seaside community in southern California-the very picture of 1950s suburban prosperity-a handful of scientists, tackled a massive project that required the ingenuity of an engineer and the vision of a great theoretician. Their work-ambitious but ultimately futile-took place against the political and cultural backdrop of the Cold War, when nuclear technology spelled both promise and terror.

Dyson's prodigious historical and scientific research, combined with his personal reminiscences and connections, make for a lively, richly detailed narrative.

George Dyson, the son of distinguished physicist Freeman Dyson, grew up immersed in the world of groundbreaking science. His previous books include the acclaimed "Darwin Among the Machines." He and his father are also the subjects of Kenneth Brower's dual biography, "The Starship and the Canoe." Dyson lives in Washington State.
Loading...
or
Not Currently Available for Direct Purchase