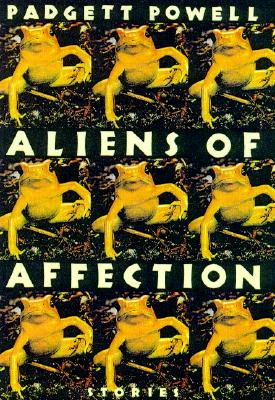 Aliens of Affection marks new territory for Padgett Powell, picking up where his first collection of stories, Typical, left off. Although his characters continue to revolt against the received instructions of modern American living--refusing to be dunked in what Saul Bellow has called the "marinade of correctness"--their concerns are less for indepence than for the maintenance of sanity itself. In this sometimes surrealistic terrain, "affection was that which, and the only thing on earth which, you should be eternally thankful for." Emotional estrangement seems both inevitable and worth fighting against to the middle-aged heroine of O. Henry Award-winner "Trick or Treat;" to the unmistakably American roofer of "Wayne" (who was introduced in Typical); to the deserted husband, father, and non-vet of "Dump;" and to the fantastic heroes in three stories grouped as "All Along the Watchtower." The nine stories collected here are hilarious, wrenching, pessimistic, buoyant, low-down, high-strung, and impeccably written.


Praise For Aliens of Affection: Stories…

"Powell . . . is not only a master of quirky language but a genius regarding the dark side of the human heart."--The Orlando Sentinel

Padgett Powell has received the Prix de Rome of the American Academy of Arts and Letters, a Whiting Writer's Award, and a nomination for the National Book Award. He teaches in Gainesville, Florida.
Loading...
or
Not Currently Available for Direct Purchase