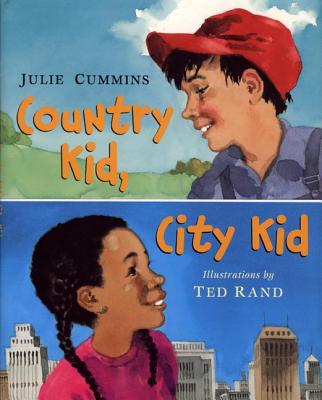 Ben and Jody may be miles apart, but they are two of a kind.

Ben is a country kid. He lives on a quiet farm, where he wakes to the peaceful sounds of cows mooing and birds chirping.

Jody is a city kid. She lives in an apartment building, where her mornings begin with honking horns and wailing sirens.

Their lives are nothing alike--or are they?

Julie Cummins has milked cows and climbed silos, ridden subways and lived in a high-rise. She currently lives in New York City, where she has a spectacular view of the Empire State Building, and vacations in the country, where she enjoys the lake views. She is the author of City Kid, Country Kid and Flying Solo.

Ted Rand has collaborated with Bill Martin, Jr. and John Archambault on several successful picture books, including The Ghost-Eye Tree, Barn Dance!, and Knots on a Counting Rope.
Loading...
or
Not Currently Available for Direct Purchase