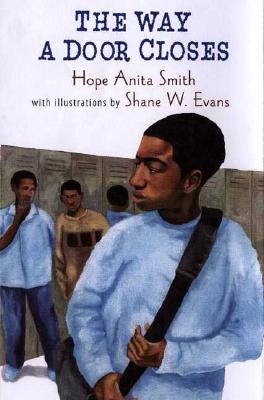 My best friend, Preacher, is being just that. His sermon today is on fathers and I am his congregation.
“Dads are light. They have no roots.
One strong wind, and they’re gone.
Out of here. History.”

With a click, a bang, a whisper—or no noise at all. There are so many ways that a door can close, but it’s not just the closing; it’s the knowing. And thirteen-year-old CJ knows too much—about losing his father, about his family’s pain, and especially about what it means to hold things together when times are the toughest.

In this beautifully written and powerfully moving novel in poems, Hope Anita Smith tells the story of a young man’s struggle to accept a father who has walked out on his family. Here, in CJ’s words, is a portrait of hurt and healing, and finding the strength to open the door again. The Way a Door Closes is the winner of the 2004 Coretta Scott King - John Steptoe New Talent Award and the 2004 Bank Street - Claudia Lewis Award and is a 2004 Bank Street - Best Children's Book of the Year.

Praise For The Way a Door Closes…

" Smith and Evans have created a wonderful way to introduce young readers to the world of poetry." --Black Issues Book Review

"Hope Smith’s voice is vivid and evocative, I’m glad her words are in the world."--Jacqueline Woodson

"Good poetry touches the heart, and this offering does just that." --School Library Journal, starred

Hope Anita Smith didn't want to just tell the story of a father who disappears: "I wanted this story to have a different ending, an ending that proves wrongs can be righted and it's never too late to say 'I'm sorry.' " A native of Akron, Ohio, Ms. Smith now lives in Los Angeles, California. This is her first book for young readers.

Shane W. Evans has illustrated several highly regarded books for children, including" Down the Winding Road "and "Osceola: Memories of a Sharecropper's Daughter," for which he received a Boston Globe-Horn Book Honor. His artwork has been exhibited in Paris, Chicago, New York, and West Africa. A native of upstate New York, Mr. Evans currently lives in Kansas City, Missouri.
Loading...
or
Not Currently Available for Direct Purchase