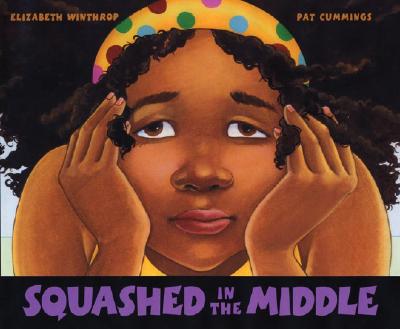 Squashed in the Middle

"I'm going to spend the night at Rosa's house," said Daisy. But nobody heard her.

Being a middle child isn't easy

Nobody ever listens to Daisy. Her father was chopping carrots. Her mother was talking on the phone. Her big sister was chasing her little brother around and around the kitchen table. So it was no surprise that no one heard where Daisy went, even though she told them.

With humorous text and striking, bold illustrations, this book captures the frustration of a middle child trying to be heard over the noise of a well-meaning family.


Praise For Squashed in the Middle…

"Cummings' recognizable robust style and intense palette are evident in the engaging design here, a bright amalgamation of bold full-page close-ups that clearly reflect Daisy's feelings…All include homey and whimsical details that give Daisy and her African-American family a thoroughly modern, familiar look… Many kids, despite their family pecking order, will respond to Daisy's predicament; everyone likes to be heard!"—Booklist, starred review

Elizabeth Winthrop, a middle child herself, has written more than fifty books for readers of all ages. These include her award-winning picture book "Dumpy La Rue" (a New York Times Best Illustrated Book), illustrated by Betsy Lewin, and "Dog Show," illustrated by Mark Ulriksen.

Pat Cummings is the illustrator of more than thirty picture books, many of which she has written herself. She is a Coretta Scott King Award winner, whose books include "Ananse and the Lizard" and "Angel Baby." Ms. Cummings teaches at Parson's School of Design and lives in Brooklyn with her husband.