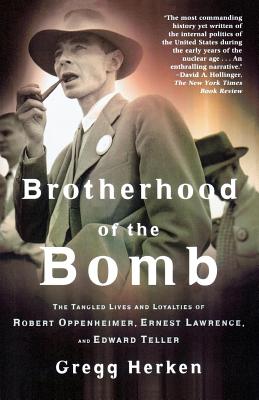 Brotherhood of the Bomb

The Tangled Lives and Loyalties of Robert Oppenheimer, Ernest Lawrence, and Edward Teller

The story of the twentieth century is largely the story of the power of science and technology. Within that story is the incredible tale of the human conflict between three men-Robert Oppenheimer, Ernest Lawrence, and Edward Teller-the scientists most responsible for the advent of weapons of mass destruction. How did science, enlisted in the service of the state during the Second World War, become a slave to its patron during the Cold War-and scientists with it? The story of these three men, is fundamentally about loyalty-to the country, to science, and to each other-and about the wrenching choices that had to be made when these allegiances came into conflict.

Gregg Herken gives us the behind-the-scenes account based upon a decade of research, interviews, and new documents. Brotherhood of the Bomb is a vital slice of American history told authoritatively-and grippingly-for the first time.


Praise For Brotherhood of the Bomb: The Tangled Lives and Loyalties of Robert Oppenheimer, Ernest Lawrence, and Edward Teller…

“The most commanding history yet written of the internal politics of the United States during the early years of the nuclear age . . . an enthralling narrative.” —The New York Times Book Review

“The story is well-crafted and meticulously researched, drawing on recently declassified FBI files and documents, and it moves at a helter-skelter pace . . . a gripping account of three tangled lives.” —The Washington Post World

“A well-written, well-documented, exciting and yet unhappy tale of a crucial encounter between science and politics.” —Los Angeles Times

Gregg Herken is a curator and historian at the Smithsonian Institution and has taught at Oberlin, Caltech, and Yale. He is the author of The Winning Weapon, Counsels of War , and Cardinal Choices and received a MacArthur grant for Brotherhood of the Bomb. He lives in Alexandria, Virginia.
or support indie stores by buying on