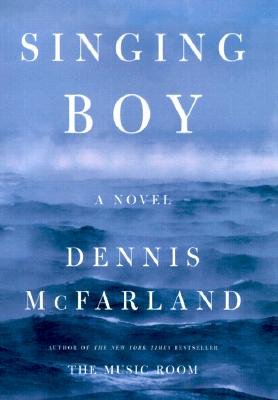 From the bestselling author of The Music Room, a deeply moving novel about lives changed forever in an instant of senseless violence.

On the way home from dinner in suburban Boston, Malcolm Vaughn is shot and killed by a stranger. His eight-year-old son, Harry, watches it happen. His wife, Sarah, holds Malcolm in her arms as he bleeds to death in the street.

Undone by shock and grief, Sarah retreats from the world, postponing her return to work as a research scientist and Harry's return to school. Harry appears to have come through the loss unscathed, until a troubling incident reveals his profound pain and confusion. Malcolm's best friend tries to help Sarah and Harry heal and move on, but he is struggling with his own personal crisis.

Recalling the emotional intensity of The Music Room, Singing Boy offers a close -- and often surprisingly funny -- exploration of the courage and frailties that bind these three people together. A story of sharp sorrow and persistent love, in which memory, forgiveness, and the generosities of time reshape a shattered world, it is a work of unforgettable resonance and power.

"Dennis McFarland is a most skillful, confident, graceful, and intelligent writer." (Alice Adams)

"McFarland is the real thing, and this extraordinary book fills me with admiration." (Frank Conroy)

"...The Music Room itself builds to a comprehensive vision, remarkable from its beginning to its surprising, satisfying ." (The New York Times Book Review)

"Sensitive...Expertly crafted...A novel whose details continue to reverberate long after one has finished the book." (Chicago Tribune, on The Music Room)

Dennis McFarland is the bestselling author of "The Music Room," "School for the Blind," and "A Face at the Window." His fiction has appeared in "Best American Short Stories" and "The New Yorker." He lives with his family in Massachussetts.
Loading...
or
Not Currently Available for Direct Purchase