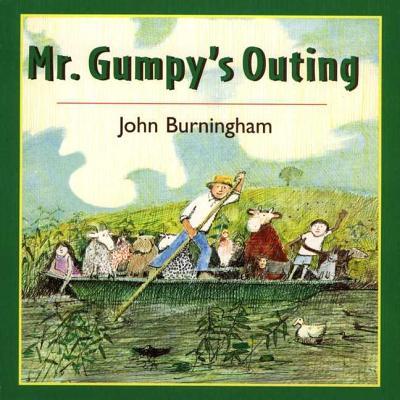 At last, a board book edition of this beloved preschool story.

One sunny day Mr. Gumpy decides to take a ride in his small boat. It's a perfect idea for a lovely summer day, and soon he is joined by children, a rabbit, a cat, a pig, and a host of other friends. But when the goat kicks, the chickens flap, the dog teases the cat and the children squabble -- the boat tips into the water and everyone tumbles out. No one minds getting wet on such a nice day, though, especially since Mr. Gumpy invites everyone to his house for tea.

A colorful new design and sturdy board book format bring this beloved classic to a whole new audience of children.


Mr. Gumpy's Outing is the winner of the 1972 Boston Globe - Horn Book Award for Picture Books and a 1971 New York Times Book Review Best Illustrated Book of the Year.

“Mr. Gumpy's little scow becomes a miniature ark when he takes two children and one each of the various domestic animals for a ride. . . . The water appears so warmly inviting, and the tea they all share so satisfying, that the promise of the first glowing page is fulfilled. Burningham's sketchy yellow lines make the sun shine on his pages, and his animals--sometimes jaunty, more often appealingly hesitant--are his alone, unostentatiously distinctive. Mr. Gumpy has bumbling charm, and his outing is an unqualified pleasure.” —Kirkus Reviews

“A real charmer of a picture book for the very young.” —Booklist

“Mr. Grumpy's Outing is out of sight.” —School Library Journal

John Burningham (1936-2018) is a highly acclaimed author and illustrator with numerous books to his credit. With Mr. Gumpy's Outing, he became the first artist ever to win England's prestigious Kate Greenaway Medal twice. He lived in England.

John Burningham (1936-2018) is a highly acclaimed author and illustrator with numerous books to his credit. With Mr. Gumpy's Outing, he became the first artist ever to win England's prestigious Kate Greenaway Medal twice. He lived in England.
Loading...
or support indie stores by buying on