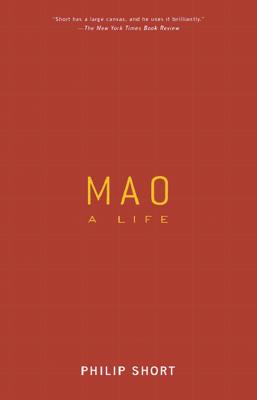 When the Nationalists routed a ragtag Red Army on the Xiang River during the Long March, an earthy Chinese peasant with a brilliant mind moved to a position of power. Eight years after his military success, Mao Tse-tung had won out over more sophisticated rivals to become party chairman, his title for life. Isolated by his eminence, he lived like a feudal emperor for much of his reign after blood purge and agricultural failures took more lives than those killed by either Stalin or Hitler. His virtual quarantine resulted in an ideological/political divide and a devastating reign of terror that became known as the Cultural Revolution. One cannot understand today's China without first understanding Mao, and Philip Short's masterly assessment -- informed by a wealth of new sources -- allows the reader to understand this colossal figure whose shadow will dominate the twenty-first century.

Philip Short has been a foreign correspondent for "The Times" (London), "The Economist," and BBC in Uganda, Moscow, China, and Washington, D.C. He lived in China for seven years; he now resides in Paris.

Praise For Mao: A Life…

"Short has the larger canvas, and he uses it brilliantly . . . he has combined what is best in journalism and scholarship; his book is full of colorful insights and detail . . ."--The New York Times Book Review

"A masterful biography. . . . The most measured, thoughtful and complete biography of Mao now available in English."--Kirkus Reviews

"Mao: A Life deserves to be the standard history. It is everything one could hope for: magisterial, beautifully written, excellently printed and rich in material from Mr. Short's own researches among those who knew and observed Mao."--Sunday Telegraph, London

"Draws on a wealth of hitherto untapped sources to fashion an uncanny portrait of Mao Zedong. . . . Short's dramatic biography will reward readers with its fresh perspective on China's civil war, Mao's treacherous relations with Stalin, party infighting and the power struggle following Mao's death. It not only sheds valuable light on Mao's character but also serves as an illuminating and sweeping history of modern China."--Publishers Weekly

"Beautifully written, grippingly readable . . . a formidable piece of research, which wears its learning so lightly you can hardly feel it."--Terry Eagleton, The Independent

"Wonderfully readable and rich . . . he tells the story superbly."--The Guardian