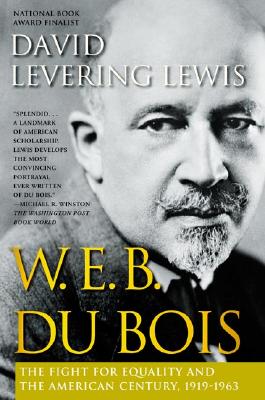 This monumental biography--eight years in the research and writing--treats the early and middle phases of a long and intense career: a crucial fifty-year period that demonstrates how Du Bois changed forever the way Americans think about themselves.

"Splendid. . . . A landmark of American scholarship. Lewis develops the most convincing portrayal ever written of Du Bois."--Michael R. Winston, The Washington Post

"Monumental. . . . A joy to read. A work of keen scholarship that will appeal to the general reader responsive to graceful, lucid prose by an author with an eye for ironic situations and complex emotions."--John Patrick Diggins, Los Angeles Times

"This second volume of Lewis's biography of Du Bois will undoubtedly become an instant classic and indispensable reading for anyone interested in the history of the twentieth century. The result of Lewis's prodigious research efforts is a magnificent reconstruction of the evolving contours of Du Bois's thought, his interactions with a host of black organizations and key political and intellectual figures, and his personal life."--Eric Amesen, Chicago Tribune

"I did not think it was possible for David Lewis to surpass what he had accomplished in the first volume of his Du Bois biography, but he has . . . . He confirms the view of many of us who believe that he is the finest American historian plying his craft today."--John Hope Franklin, James B. Duke Professor of History Emeritus at Duke University

"A masterpiece of the biographer's craft. With this volume, David Levering Lewis has brought to magnificent completion his definitive biography of W.E.B. Du Bois. Lewis writes with consistent empathy, balance, and grace about one of the twentieth century's most complicated and controversial figures. A must-read for anyone seeking to understand the tortured history of race relations in the modern world."--David M. Kennedy, Donald J. McLachlan Professor of History at Stanford University and author of Freedom from Fear: The American People in Depression and War, 1929-1945, winner of the 1999 Pulitzer Prize

David Levering Lewis is the Martin Luther King Jr., University Professor in the history department at Rutgers University. He has been awarded fellowships from the Guggenheim Foundation, Woodrow Wilson International Center, the Center for Advanced Study in the Behavioral Sciences, the National Humanities Center, and the John D. and Catherine T. MacArthur Foundation. Educated at Fisk and Columbia universities and the London School of Economics and Political Science, Professor Lewis is the author of several acclaimed books, including "King: A Biography, When Harlem Was in Vogue, The Race to Fashoda," and his two-volume Pulitzer Prize-winning biography of W.E.B. Du Bois. He and his wife live in Manhattan.
Loading...
or
Not Currently Available for Direct Purchase