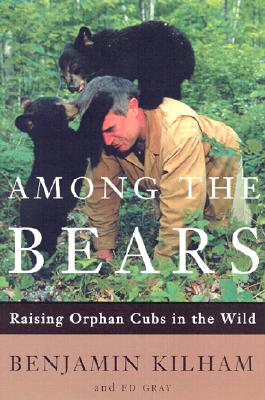 Raising Orphan Cubs in the Wild

A first-person account of wild bear behavior that is both a thrilling animal story and a groundbreaking work of science.

In the spring of 1993, Ben Kilham, a naturalist who lives in the woodlands of New Hampshire, began raising a pair of orphaned wild black bears. The experience changed his life.

While spending thousands of hours with the cubs, Kilham discovered unknown facets of bear behavior that have radically revised our understanding of animal behavior. Now widely recognized for his contributions to wildlife science, Kilham reveals that bears are altruistic and cooperate with unrelated, even unknown individuals, while our closer relatives, the supposedly more highly evolved chimps, cooperate only within troops of recognizable members.

Kilham, who turned a disability, dyslexia, to his advantage as a naturalist, offers fascinating insights into the emotional life of bears. His work-which has been featured in several National Geographic television specials-also illustrates the powerful black bear intelligence that has survived bounties and overhunting to make them North America's dominant omnivore, familiar to every reader. Beyond the natural history, he introduces individual bears who become enthralling and memorable characters.

As in the bestselling books by Jane Goodall and Dian Fossey, Among the Bears explores the breaking down of mutual suspicion and building up of trust between species, with its hopeful implications for the shared future of humans and animals in the wild.

Benjamin Kilham is a woodsman and naturalist who over the past twenty-five years has discovered and then field-tested a new, exciting wildlife biology. Ed Gray is a naturalist writer and founder of "Gray's Sporting Journal." They both live in Lyme, New Hampshire.
Loading...
or
Not Currently Available for Direct Purchase