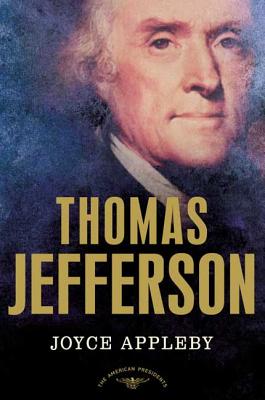 Few presidents have embodied the American spirit as fully as Thomas Jefferson. He was the originator of so many of the founding principles of American democracy. Politically, he shuffled off the centralized authority of the Federalists, working toward a more diffuse and minimalist leadership. He introduced the bills separating church and state and mandating free public education. He departed from the strict etiquette of his European counterparts, appearing at state dinners in casual attire and dispensing with hierarchical seating arrangements. Jefferson initiated the Lewis and Clark expedition and seized on the crucial moment when Napoleon decided to sell the Louisiana Territory, thus extending the national development. In this compelling examination, distinguished historian Joyce Appleby captures all of the richness of Jefferson's character and accomplishments.

" … UCLA historian Appleby (Inheriting the Revolution: The First Generation of Americans) has succeeded in writing as good a brief study of this complex man as is imaginable. Another in a series on the American chief executives edited by Arthur M. Schlesinger Jr., her elegant book is a liberal's take on the complex, sphinxlike founder of American liberalism." - Publishers Weekly

Joyce Appleby (1929-2016) was the professor emerita, University of California, Los Angeles, and was president of both the Organization of American Historians and the American Historical Association. Specializing in the study of early America, she is the author of Thomas Jefferson: The American Presidents Series: The 3rd President, 1801-1809, The Relentless Revolution: A History of Capitalism and Shores of Knowledge: New World Discoveries and the Scientific Imagination.