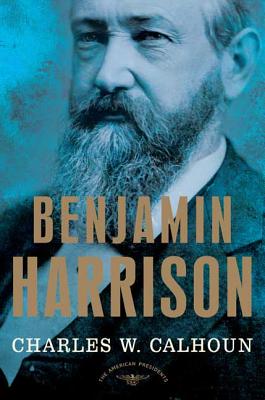 Politics was in Benjamin Harrison's blood. His great-grandfather signed the Declaration and his grandfather, William Henry Harrison, was the ninth president of the United States. Harrison, a leading Indiana lawyer, became a Republican Party champion, even taking a leave from the Civil War to campaign for Lincoln. After a scandal-free term in the Senate-no small feat in the Gilded Age-the Republicans chose Harrison as their presidential candidate in 1888. Despite losing the popular vote, he trounced the incumbent, Grover Cleveland, in the electoral college.

In contrast to standard histories, which dismiss Harrison's presidency as corrupt and inactive, Charles W. Calhoun sweeps away the stereotypes of the age to reveal the accomplishments of our twenty-third president. With Congress under Republican control, he exemplified the activist president, working feverishly to put the Party's planks into law and approving the first billion-dollar peacetime budget. But the Democrats won Congress in 1890, stalling his legislative agenda, and with the First Lady ill, his race for reelection proceeded quietly. (She died just before the election.) In the end, Harrison could not beat Cleveland in their unprecedented rematch.

With dazzling attention to this president's life and the social tapestry of his times, Calhoun compellingly reconsiders Harrison's legacy.

Charles W. Calhoun is a professor of history at East Carolina University. A former National Endowment for the Humanities fellow, Calhoun is the author or editor of four books, including The Gilded Age, and a member of the editorial board of the Journal of the Gilded Age and Progressive Era. He lives in Greenville, North Carolina.