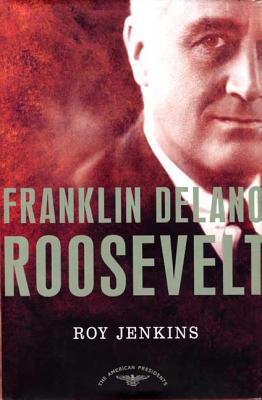 A protean figure and a man of massive achievement, Franklin Delano Roosevelt was the only man to be elected to the presidency more than twice. In a ranking of chief executives, no more than three of his predecessors could truly be placed in contention with his standing, and of his successors, there are so far none.

In acute, stylish prose, Roy Jenkins tackles all of the nuances and intricacies of FDR's character. He was a skilled politician with astounding flexibility; he oversaw an incomparable mobilization of American industrial and military effort; and, all the while, he aroused great loyalty and dazzled those around him with his personal charm. Despite several setbacks and one apparent catastrophe, his life was buoyed by the influence of Eleanor, who was not only a wife but an adviser and one of the twentieth century's greatest political reformers.

Nearly complete before Jenkins's death in January 2003, this volume was finished by historian Richard Neustadt.

"Elegantly describing FDR's course through a score of personal and political ordeals, Jenkins astutely shows us the man in all his many incarnations: the confident son of privilege who morphed into a wry, young politico on the rise; the startled victim, for whom all things had previously come so easily, hitting the brick wall of polio and fighting back, strenuously leading his broken country out of its two great 20th-century crises: the Great Depression and World War II. " - Publishers Weekly

Roy Jenkins was the author of twenty-one books, including the New York Times bestsellers Churchill and Gladstone, the latter of which won the Whitbread Prize for Biography. Active in British politics for half a century, he entered the House of Commons as a Labour member in 1948 and subsequently served as minister of aviation, home secretary, and chancellor of the Exchequer. In 1977—81 he was president of the European Commission. In 1987 he became chancellor of Oxford University and took his seat in the House of Lords as Lord Jenkins of Hill head. He also served as president of the Royal Society of Literature.