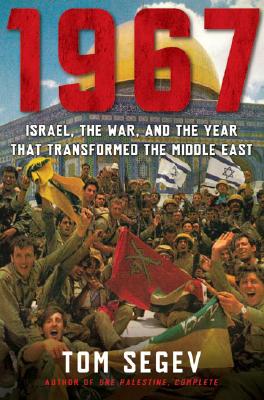 Israel, the War, and the Year that Transformed the Middle East

From Israel's leading historian, a sweeping history of 1967--the war, what led up to it, what came after, and how it changed everything Tom Segev's acclaimed works One Palestine, Complete and The Seventh Million overturned accepted views of the history of Israel. Now, in 1967--a number-one bestseller in Hebrew--he brings his masterful skills to the watershed year when six days of war reshaped the country and the entire region.
Going far beyond a military account, Segev re-creates the crisis in Israel before 1967, showing how economic recession, a full grasp of the Holocaust's horrors, and the dire threats made by neighbor states combined to produce a climate of apocalypse. He depicts the country's bravado after its victory, the mood revealed in a popular joke in which one soldier says to his friend, "Let's take over Cairo"; the friend replies, "Then what shall we do in the afternoon?"
Drawing on unpublished letters and diaries, as well as government memos and military records, Segev reconstructs an era of new possibilities and tragic missteps. He introduces the legendary figures--Moshe Dayan, Golda Meir, Gamal Abdul Nasser, and Lyndon Johnson--and an epic cast of soldiers, lobbyists, refugees, and settlers. He reveals as never before Israel's intimacy with the White House as well as the political rivalries that sabotaged any chance of peace. Above all, he challenges the view that the war was inevitable, showing that a series of disastrous miscalculations lie behind the bloodshed.
A vibrant and original history, 1967 is sure to stand as the definitive account of that pivotal year.


Praise For 1967: Israel, the War, and the Year that Transformed the Middle East…

"Today we know that Israel's triumph in 1967 was a Pyrrhic victory. Tom Segev's 1967 makes that more clear than anything written on the subject . . . Segev documents this historic tragedy brilliantly, authoritatively, as no one has before."--Amos Elon, Ha'aretz "Tom Segev's 1967 offers a brilliant description of the Six Day War in its widest context: the international scene, the Middle Eastern confrontations, the political and social situation of Israel, as well as fascinating snippets of everyday life. The crucial role of individual actors is deftly woven into the general picture, the description of the military events is enthralling. This is probably the best book on those most fateful days in the history of Israel and the Middle East."--Saul Friedlander, author of The Years Of Extermination: Nazi Germany And The Jews, 1939-1945 "The year 1967 divides the history of Israel in two: what came before and what came after. Tom Segev's book makes this abundantly clear, and demonstrates the difference between a military victory and a political one."--Daniel Barenboim

Tom Segev is a columnist for Ha'aretz, Israel's leading newspaper, and the author of three now-classic works on the history of Israel: "1949: The First Israelis"; The Seventh Million: The Israelis and the Holocaust; and "One Palestine, Complete: Jews and Arabs Under the British Mandate," which was a "New York Times" Editors' Choice for 2000. He lives in Jerusalem.
Loading...
or
Not Currently Available for Direct Purchase