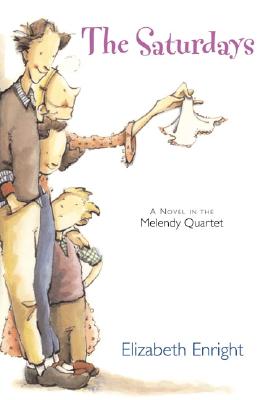 Meet the Melendys! Mona, the eldest, is thirteen. She has decided to become an actress and can recite poetry at the drop of a hat. Rush is twelve and a bit mischievous. Miranda is ten and a half. She loves dancing and painting pictures. Oliver is the youngest. At six, he is a calm and thoughful person. They all live with their father, who is a writer, and Cuffy, their beloved housekeeper, who takes on the many roles of nurse, cook, substitute mother, grandmother, and aunt.

Elizabeth Enright’s Melendy Quartet, which captures the lively adventures of a family as they move from the city to the country, are being published in new editions. Each of the books features a foreward and signature black-and-white interior illustrations by the author. Popular artist Tricia Tusa provides irresistible new cover art that will appeal to today’s readers.

Praise For The Saturdays…

"Enright has a quick eye for the unexpected, the amusing and the beautiful in what might be just ordinary experiences." -- The New York Times "The Melendys are the quintessential storybook family...[their] ardent approach to living is eternally relevant." -- Publishers Weekly

Elizabeth Enright (1909-1968) was born in Oak Park, Illinois, but spent most of her life in or near New York City. Originally envisioning a career solely in illustration, she studied art in Paris, France, and at the Parsons School of Design in New York City. Throughout her life, Elizabeth Enright wrote and illustrated numerous books, winning many awards in the process. Among those awards were the 1939 John Newbery Medal for "Thimble Summer" and a 1958 Newbery Honor for "Gone-Away Lake." The first of the Melendy Quartet, "The Saturdays," was published in 1941. Translated into numerous languages throughout the world, her stories have been known and loved by many for generations.
Loading...
or
Not Currently Available for Direct Purchase