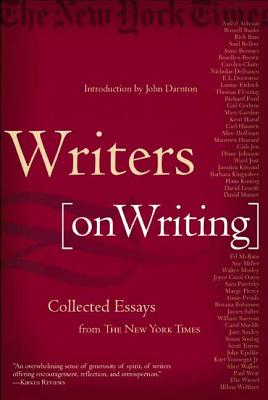 Now in paperback, today's most celebrated writers explore literature and the literary life in an inspirational collection of original essays.

By turns poignant, hilarious, and practical, Writers on Writing brings together more than forty of contemporary literature's finest voices.

Pieces range from reflections on the daily craft of writing to the intersection of art's and life's consequential moments. Authors discuss what impels them to write: creating a sense of control in a turbulent universe; bearing witness to events that would otherwise be lost in history or within the writer's soul; recapturing a fragment of time. Others praise mentors and lessons, whether from the classroom, daily circumstances, or the pages of a favorite writer. For anyone interested in the art and rewards of writing, Writers on Writing offers an uncommon and revealing view of a writer's world.


Praise For Writers on Writing: Collected Essays from The New York Times…

“The essays . . . are all unified by an overwhelming sense of generosity of spirit, of writers offering encouragement, reflection, and introspection . . .” —Kirkus Reviews

“In a time when everything around me seemed completely out of control, when lives were being cut short and fate seemed especially cruel, I had the need to get to an ending of something. I was desperate to know how things turned out, in fiction if not in life. More than ever, more than anything, I was a writer.” —Alice Hoffman, from Writers on Writing

“The trial lawyer's job and the novelist's were, in some aspects, shockingly similar. Both involved the reconstruction of experience, usually through many voices. . . . But there the paths deviated. In this arena the universal trumped; there were no prizes for being rarefied or ahead of the times. The trial lawyer who lost the audience also inevitably lost the case.” —Scott Turow, from Writers on Writing

John Darnton, winner of the Pulitzer Prize and the George Polk Award for his journalism, is culture editor for The New York Times and the author of two novels, The Experiment and Neanderthal. He lives in New York.

The New York Times is a daily newspaper published in New York City and distributed internationally. Founded in 1851, the newspaper has won 112 Pulitzer Prizes, more than any other news organization. Its website receives 30 million unique visitors per month.
Loading...
or support indie stores by buying on