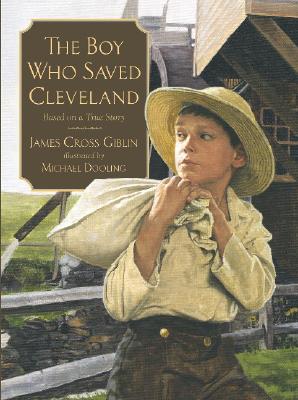 The Boy Who Saved Cleveland (Hardcover)

If not for Seth Doan, the city of Cleveland wouldn't exist today...

In 1798, Cleveland, Ohio, was in danger of being wiped out by a malaria epidemic. Based on fact, this book tells the remarkable story of Seth Doan, a young boy whose heroic efforts kept his family and neighbors alive and ultimately put the city of Cleveland on the map. J

im Giblin's first full-length work of historical fiction, this chapter book is perfect for kids of that in-between age too old for picture books and too young for full-length novels.

"The Boy Who Saved Cleveland" is a 2007 Bank Street - Best Children's Book of the Year.

James Cross Giblin is the author of many prestigious nonfiction books for children, including "The Life and Death of Adolf Hitler." He grew up in a suburb of Cleveland, Ohio, and now lives in New York City.Michael Dooling has illustrated many historical books, including James Cross Giblin's "Benjamin Franklin." He lives with his family in Audubon, New Jersey.
or
Buy Here
(This book is on backorder)
Copyright © 2020 American Booksellers Association