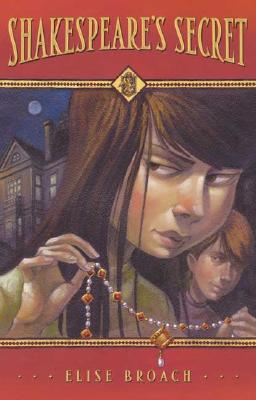 " Hero changed into a T-shirt, grabbed a book, and padded barefoot into her sister's room. The large windows overlooked the backyard. She could see the moonlight streaming over the trees and bushes, making long, crazy shadows across the grass. Was there a diamond hidden out there somewhere? She looked at Beatrice, already settled under the covers. She wanted to tell her about the Murphys, but at the same time, she didn't. She wanted to keep the secret. To have something that belonged only to her."

A missing diamond, a mysterious neighbor, a link to Shakespeare-can Hero uncover the connections?

When Hero starts sixth grade at a new school, she's less concerned about the literary origins of her Shakespearean name than about the teasing she's sure to suffer because of it. So she has the same name as a girl in a book by a dusty old author. Hero is simply not interested in the connections. But that's just the thing; suddenly connections are cropping up all over, and odd characters and uncertain pasts are exactly what do fascinate Hero. There's a mysterious diamond hidden in her new house, a curious woman next door who seems to know an awful lot about it, and then, well, then there's Shakespeare. Not to mention Danny Cordova, only the most popular boy in school. Is it all in keeping with her namesake's origin-just much ado about nothing? Hero, being Hero, is determined to figure it out.

"A new kid in town and her name is Hero. Just wait until you read about her and the mystery she's uncovered. I couldn't wait. I kept turning the pages. Terrific Hero, terrific book. I loved it!"--Patricia Reilly Giff (author of the Newbery Honor Books Pictures of Hollis Woods and Lily's Crossing)
"More linear and traditionally evidence-driven than Blue Balliett's Chasing Vermeer, this agreeable history-mystery may have even more appeal to budding sleuths."—Kirkus Reviews, starred review

Elise Broach is the "New York Times" bestselling author of books for children and young adults, including "Desert Crossing" and "Masterpiece," as well as several picture books. She lived in England from the ages of twelve to fourteen and vividly remembers her first visit to William Shakespeare's house in Stratford-upon-Avon. At a rare-book store there, she purchased a volume of Shakespeare's plays that she still keeps on her nightstand. Ms. Broach holds undergraduate and graduate degrees in history from Yale University. She was born in Georgia and lives in the woods of rural Connecticut, walking distance from three farms, a library, a post office and two country stores.
or support indie stores by buying on
(This book is on backorder)