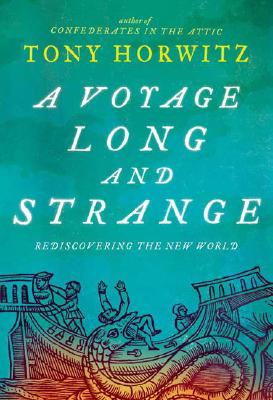 A Voyage Long and Strange

On a chance visit to Plymouth Rock, Tony Horwitz realizes he's mislaid more than a century of American history, from Columbus's sail in 1492 to Jamestown's founding in 16-oh-something. Did nothing happen in between? Determined to find out, he embarks on a journey of rediscovery, following in the footsteps of the many Europeans who preceded the Pilgrims to America.

An irresistible blend of history, myth, and misadventure, "A Voyage Long and Strange" captures the wonder and drama of first contact. Vikings, conquistadors, French voyageurs these and many others roamed an unknown continent in quest of grapes, gold, converts, even a cure for syphilis. Though most failed, their remarkable exploits left an enduring mark on the land and people encountered by late-arriving English settlers.

Tracing this legacy with his own epic trek from Florida's Fountain of Youth to Plymouth's sacred Rock, from desert pueblos to subarctic sweat lodges Tony Horwitz explores the revealing gap between what we enshrine and what we forget. Displaying his trademark talent for humor, narrative, and historical insight, "A Voyage Long and Strange" allows us to rediscover the New World for ourselves.


Praise For A Voyage Long and Strange: Rediscovering the New World…

"Pulitzer Prize–winning journalist Horwitz has presented what could be described as a guide for those who are historically ignorant of the “lost century” between the first voyage of Columbus and the establishment of Jamestown in 1607. In this informative, whimsical, and thoroughly enjoyable account, Horwitz describes the exploits of various explorers and conquistadores and enriches the stories with his own experiences when visiting some of the lands they “discovered.” Horwitz writes in a breezy, engaging style, so this combination of popular history and travelogue will be ideal for general readers.—Booklist (starred review)

“Irreverent, effervescent… accessible to all ages, hands-on and immensely readable, this book invites readers to search out America ’s story for themselves.”—Kirkus Reviews

“Funny and lively…popular history of the most accessible sort.  The stories [Horwitz] tells are full of vivid characters and wild detail.”—The New York Times Book Review

“A romp through the sixteenth century….  Horwitz has an ear for a good yarn and an instinct for the trail leading to an entertaining anecdote.”—The Washington Post

“Like travel writer Bill Bryson, Horwitz has a penchant for meeting colorful characters and getting himself into bizarre situations.”—The Christian Science Monitor

“By conveying our past so heartily, handsomely and winsomely, Tony Horwitz does America proud.”—The Providence Journal

Tony Horwitz is the bestselling author of "Midnight Rising," "A Voyage Long and Strange," "Blue Latitudes," "Confederates in the Attic," and "Baghdad Without a Map." He is also a Pulitzer Prize-winning journalist who has worked for "The Wall Street Journal" and "The New Yorker." He lives in Martha's Vineyard with his wife, Geraldine Brooks, and their two sons.
Loading...
or
Not Currently Available for Direct Purchase