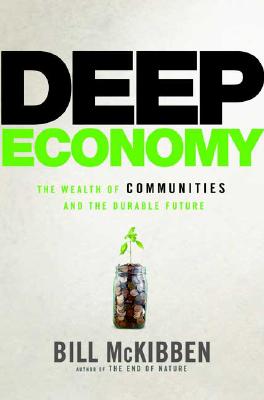 The Wealth of Communities and the Durable Future

The bestselling author of "The End of Nature" issues an impassioned call to arms for an economy that creates community and ennobles our lives
In this powerful and provocative manifesto, Bill McKibben offers the biggest challenge in a generation to the prevailing view of our economy. For the first time in human history, he observes, "more" is no longer synonymous with "better"--indeed, for many of us, they have become almost opposites. McKibben puts forward a new way to think about the things we buy, the food we eat, the energy we use, and the money that pays for it all. Our purchases, he says, need not be at odds with the things we truly value.
McKibben's animating idea is that we need to move beyond "growth" as the paramount economic ideal and pursue prosperity in a more local direction, with cities, suburbs, and regions producing more of their own food, generating more of their own energy, and even creating more of their own culture and entertainment. He shows this concept blossoming around the world with striking results, from the burgeoning economies of India and China to the more mature societies of Europe and New England. For those who worry about environmental threats, he offers a route out of the worst of those problems; for those who wonder if there isn't something more to life than buying, he provides the insight to think about one's life as an individual and as a member of a larger community.
McKibben offers a realistic, if challenging, scenario for a hopeful future. As he so eloquently shows, the more we nurture the essential humanity of our economy, the more we will recapture our own.

Bill McKibben is the author of ten books, including "The End of Nature," "The Age of Missing Information," and "Enough: Staying Human in an Engineered Age." A former staff writer for "The New Yorker," he writes regularly for "Harper's," "The Atlantic Monthly," and "The New York Review of Books," among other publications. He is a scholar in residence at Middlebury College and lives in Vermont with his wife, the writer Sue Halpern, and their daughter.

Praise For Deep Economy: The Wealth of Communities and the Durable Future…

"I'd like to see Deep Economy read in every Econ 101 class. Bill McKibben asks the central human question: What is the economy for? The stakes here are terrifyingly high, but with his genial style and fascinating examples of alternative approaches, McKibben convinces me that economics is anything but dismal—if only we can learn to do it right!"—Barbara Ehrenreich, author of Nickel and Dimed "The cult of growth and globalization has seldom been so effectively challenged as by Bill McKibben in Deep Economy. But this bracing tonic of a book also throws the bright light of McKibben's matchless journalism on the vibrant local economies now springing up like mushrooms in the shadow of globalization. Deep Economy fills you with a hope and a sense of fresh possibility."—Michael Pollan, author of The Omnivore's Dilemma "How is our nation going to cope with global warming, peak oil, inequality, and a growing sense of isolation? Bill McKibben provides the simple but brilliant answer the economists have missed—we need to create 'depth' through local interdependence and sustainable use of resources. I will be requiring this inspiring book for my students, and passionately recommending it to everyone else I know."—Juliet Schor, professor of sociology, Boston College, and author of The Overspent American "Bill McKibben works on the frontiers of new understandings and returns with his startling and lucid revelations of the possible future. A saner human-scale world does exist—just over the horizon—and McKibben introduces us to the people and ideas leading us there."—William Greider, author of The Soul of Capitalism: Opening Paths to a Moral Economy "Masterfully crafted, deeply thoughtful and mind-expanding. . . . An incisive critique of the unintended consequences of our…growth-oriented economy.”—Los Angeles Times

"What makes McKibben's book stand out is the completeness of his arguments and his real-world approach to solutions."—USA Today

“McKibben is a fitting prophet… [His] dexterity as a keen observer and stellar wordsmith makes Deep Economy well worth reading.”—The Globe and Mail (Toronto)

“McKibben’s proposals for new, less growth-centered ways of thinking about economics are intriguing, and offer hope that change is possible.”—Publishers Weekly (Starred Review)