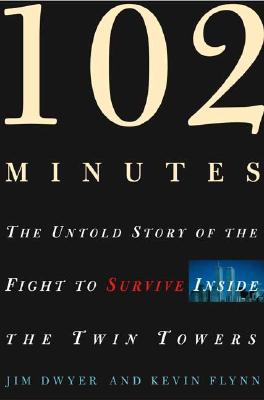 The dramatic and moving account of the struggle for life inside the World Trade Center on the morning of September 11, when every minute counted

At 8:46 am on September 11, 2001, 14,000 people were inside the twin towers-reading e-mails, making trades, eating croissants at Windows on the World. Over the next 102 minutes, each would become part of a drama for the ages, one witnessed only by the people who lived it-until now.

Of the millions of words written about this wrenching day, most were told from the outside looking in. New York Times reporters Jim Dwyer and Kevin Flynn have taken the opposite-and far more revealing-approach. Reported from the perspectives of those inside the towers, 102 Minutes captures the little-known stories of ordinary people who took extraordinary steps to save themselves and others. Beyond this stirring panorama stands investigative reporting of the first rank. An astounding number of people actually survived the plane impacts but were unable to escape, and the authors raise hard questions about building safety and tragic flaws in New York's emergency preparedness.

Dwyer and Flynn rely on hundreds of interviews with rescuers, thousands of pages of oral histories, and countless phone, e-mail, and emergency radio transcripts. They cross a bridge of voices to go inside the infernos, seeing cataclysm and heroism, one person at a time, to tell the affecting, authoritative saga of the men and women-the nearly 12,000 who escaped and the 2,749 who perished-as they made 102 minutes count as never before. 102 Minutes is a 2005 National Book Award Finalist for Nonfiction.

Praise For 102 Minutes: The Untold Story of the Fight to Survive Inside the Twin Towers…

“A heart-stopping, meticulous account. . . . I suspect that you, like me, will read this book in a single suspenseful sitting, even though we know the ending.” --James B. Stewart, The New York Times Book Review

“The chief virtue of 102 Minutes, Jim Dwyer and Kevin Flynn's unsparing, eloquent history of the struggle to survive inside the World Trade Center, is the authors' insistence that truth supplant myth. However comforting myths may be after a defeat, they're useless in assessing what went wrong and may actually be impediments to preventing future disasters.”
--John Farmer (former senior counsel to the 9/11 Commission), The Washington Post Book World

“An astounding reconstruction of what happened inside the World Trade Center. . . . These are stories, after all, you have to share.” --Susannah Meadows, Newsweek

“Exhaustively researched and smoothly written. . . . Dwyer and Flynn’s most impressive achievement: writing in a way that confers dignity on each subject. This is one book that will stay with most readers for a very long time.” -- Michelle Green, People

“For those of us haunted by the tragedy, an indispensable book.” --O Magazine

"A masterpiece of reporting....succinct...riveting enough to be read in a sitting...heart-wrenching...Brilliant and troubling." --Kevin Baker, New York Times

"It took the authors three years to describe what happened in 102 minutes...The book is worth the wait." --Ingrid Ahlgren, Providence Journal

"Many of the stories are astounding; almost all are heartbreaking...They accord these men and women the honor they deserve." --Brian Palmer, Newsday

Jim Dwyer is the coauthor of "Actual Innocence" and "Two Seconds Under the World," and the author of "Subway Lives." A Pulitzer Prize winner, he writes the About New York column for "The New York Times." He lives in New York City.Kevin Flynn, a special projects editor at "The New York Times," was the newspaper's police bureau chief on September 11, having previously worked as a reporter for the New York "Daily News," "Newsday," and "The Advocate" (Stamford). He lives in Connecticut.
Loading...
or
Not Currently Available for Direct Purchase