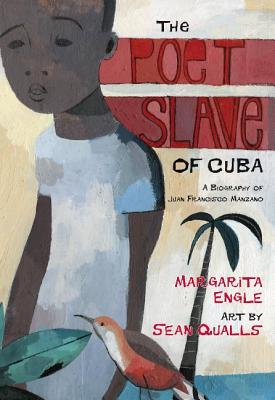 A lyrical biography of a Cuban slave who escaped to become a celebrated poet.

The Poet Slave of Cuba is the winner of the 2008 Pura Belpre Medal for Narrative and a 2007 Bank Street - Best Children's Book of the Year.

* "An absolutely lovely book . . . that should be read by young and old, black and white, Anglo and Latino."
--School Library Journal, starred review

* "The moving poetry and finely crafted story will draw readers in and leave them in tears and in awe."
--The Bulletin of the Center for Children's Books, starred review

Margarita Engle is a Cuban American poet, novelist, and journalist whose work has been published in many countries. She is the author of young adult nonfiction books and novels in verse including The Surrender Tree, a Newbery Honor Book, Hurricane Dancers, The Firefly Letters, and Tropical Secrets. She lives in northern California.Sean Qualls is the illustrator of The Baby on the Way and Powerful Words. He lives with his wife and their son in Brooklyn, New York.
Loading...
or
Not Currently Available for Direct Purchase