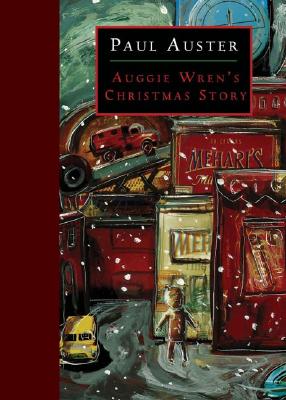 When Paul Auster was asked by The New York Times to write a Christmas story for the Op-Ed page, the result, "Auggie Wren's Christmas Story," led to Auster's collaboration on a film adaptation, Smoke. Now the story has found yet another life in this enchanting illustrated edition.

It begins with a writer's dilemma: he's been asked by The New York Times to write a story that will appear in the paper on Christmas morning. The writer agrees, but he has a problem: How to write an unsentimental Christmas story? He unburdens himself to his friend at his local cigar shop, a colorful character named Auggie Wren. "A Christmas story? Is that all?" Auggie counters. "If you buy me lunch, my friend, I'll tell you the best Christmas story you ever heard. And I guarantee every word of it is true."

And an unconventional story it is, involving a lost wallet, a blind woman, and a Christmas dinner. Everything gets turned upside down. What's stealing? What's giving? What's a lie? What's the truth? It's vintage Auster, and pure pleasure: a truly unsentimental but completely affecting tale.

Paul Auster is the bestselling author of "Sunset Park, Invisible, Man in the Dark, Travels in the Scriptorium, The Brooklyn Follies," and "Oracle Night." "I Thought My Father Was God," the NPR National Story Project anthology, which he edited, was also a national bestseller. In 2006, he was elected to the American Academy of Arts and Letters for Literature. His work has been translated into thirty-five languages. He lives in Brooklyn, New York.

ISOL is a celebrated Argentinian illustrator whose work has been featured internationally. She lives in Buenos Aires
Loading...
or
Not Currently Available for Direct Purchase