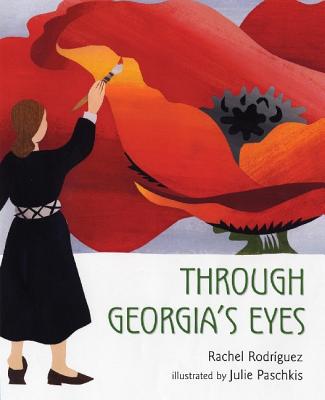 A gorgeous, evocative biography of one of America's most beloved artists.

Georgia O'Keeffe saw the world differently from most people. As a child she roamed the prairie with a sketch pad in her hand, struggling to capture on paper what she saw all around her. At art school she learned to speak in paint on canvas.

But Georgia felt confined by city life. She longed for vast expanses of space, and she found it in the red hills and silent deserts of New Mexico.

Lyrical and vivid, this is a portrait of an exceptional artist, a woman whose eyes were open to the wideness and wonder of the world.

Through Georgia's Eyes is a 2007 Bank Street - Best Children's Book of the Year.


Praise For Through Georgia's Eyes…

“Written and illustrated with directness and sensitivity, this is a fresh, original portrait of the artist.” —Booklist, starred review

Rachel Rodríguez has published in the Los Angeles Times and aired essays on northern California public radio. She lives in San Francisco. She is the author of Through Georgia’s Eyes and Building on Nature.

JULIE PASCHKIS won a Boston Globe-Horn Book Honor for Yellow Elephant. She is also the illustrator for the Worldwide Stories for children and lives in Seattle.
Loading...
or support indie stores by buying on