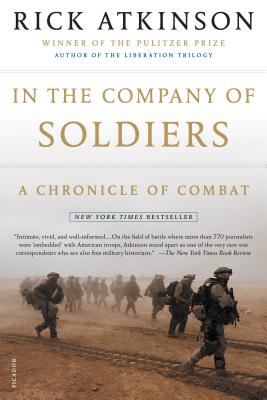 In the Company of Soldiers (Paperback)

A Chronicle of Combat

"A beautifully written and memorable account of combat from the top down and bottom up as the 101st Airborne commanders and front-line grunts battle their way to Baghdad.... A must-read."—Tom Brokaw

For soldiers in the 101st Airborne Division, the road to Baghdad began with a midnight flight out of Fort Campbell, Kentucky, in late February 2003. For Rick Atkinson, who would spend nearly two months covering the division for The Washington Post, the war in Iraq provided a unique opportunity to observe today's U.S. Army in combat. Now, in this extraordinary account of his odyssey with the 101st, Atkinson presents an intimate and revealing portrait of the soldiers who fight the expeditionary wars that have become the hallmark of our age.

At the center of Atkinson's drama stands the compelling figure of Major General David H. Petraeus, described by one comrade as "the most competitive man on the planet." Atkinson spent virtually all day every day at Petraeus's elbow in Iraq, where he had an unobstructed view of the stresses, anxieties, and large joys of commanding 17,000 soldiers in combat. And all around Petraeus, we see the men and women of a storied division grapple with the challenges of waging war in an unspeakably harsh environment.

With the eye of a master storyteller, a brilliant military historian puts us right on the battlefield. In the Company of Soldiers is a compelling, utterly fresh view of the modern American soldier in action.

Praise For In the Company of Soldiers: A Chronicle of Combat…

“A beautifully written and memorable account of combat from the top down and bottom up as the 101st Airborne commanders and frontline grunts battle their way to Baghdad...A must read.” —Tom Brokaw

“An engaging and accurate view of life on the ground during the Iraq war. It likely will be the Embedded Book to Read.” —Chicago Tribune

“An exceptional achievement...With a skill rarely seen in the genre of military narratives, Atkinson tells a compelling story about the war and the modern American military that fought it.” —The Indianapolis Star

“Atkinson's deep knowledge of the U.S. military, combined with his reporting skills and fluid writing, have yielded, as expected, a superb book about the fall of Iraq.” —The Denver Post