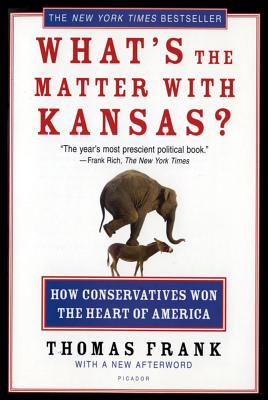 What's the Matter with Kansas?

How Conservatives Won the Heart of America

The New York Times bestseller, praised as "hilariously funny . . . the only way to understand why so many Americans have decided to vote against their own economic and political interests" -(Molly Ivins)

Hailed as "dazzlingly insightful and wonderfully sardonic" (Chicago Tribune), "very funny and very painful" (San Francisco Chronicle), and "in a different league from most political books" (The New York Observer), What's the Matter with Kansas? unravels the great political mystery of our day: Why do so many Americans vote against their economic and social interests? With his acclaimed wit and acuity, Thomas Frank answers the riddle by examining his home state, Kansas-a place once famous for its radicalism that now ranks among the nation's most eager participants in the culture wars. Charting what he calls the "thirty-year backlash"-the popular revolt against a supposedly liberal establishment-Frank reveals how conservatism, once a marker of class privilege, became the creed of millions of ordinary Americans.

A brilliant analysis-and funny to boot-What's the Matter with Kansas? is a vivid portrait of an upside-down world where blue-collar patriots recite the Pledge while they strangle their life chances; where small farmers cast their votes for a Wall Street order that will eventually push them off their land; and where a group of frat boys, lawyers, and CEOs has managed to convince the country that it speaks on behalf of the People.


Praise For What's the Matter with Kansas?: How Conservatives Won the Heart of America…

“The best political book of the year.” —Nicholas Kristof, The New York Times

“Frank is a formidable controversialist-imagine Michael Moore with a trained brain and an intellectual conscience.” —George F. Will, The Washington Post

“A searing piece of work . . . one of the most important political writings in years.” —The Boston Globe

“Dazzlingly insightful and wonderfully sardonic . . . Frank has made much sense of the world in this book.” —Chicago Tribune

“Impassioned, compelling . . . Frank's books mark him as one of the most insightful thinkers of the twenty-first century, four years into it.” —Houston Chronicle